ANOTHER MASS GRAVE FOUND IN IRAQ - PROBABLY ONE OF SADDAM'S

Security forces in Iraq have found a mass grave containing about 100 decomposed bodies. 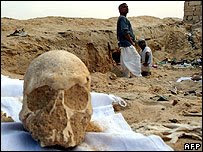 The grave, discovered in Khalis, north of the capital, Baghdad, is one of the largest such finds in several months.

...A US military spokesman said the bodies were mainly skeletal, indicating they may have been there a long time.

"We can't identify them," he told AFP news agency. "There are just bones in there. At the moment we have left the remains in the grave itself."

Khalis Human rights groups believe there are many such mass graves in Iraq where thousands of people killed during the regime of deposed president Saddam Hussein were buried.

Since the Saddam Hussein regime was overthrown in May, 270 mass graves have been reported.

By mid-January, 2004, the number of confirmed sites climbed to fifty-three. Some graves hold a few dozen bodies—their arms lashed together and the bullet holes in the backs of skulls testimony to their execution. Other graves go on for hundreds of meters, densely packed with thousands of bodies.

"Human Rights Watch estimates that as many as 290,000 Iraqis have been 'disappeared' by the Iraqi government over the past two decades," said the group in a statement in May. "Many of these 'disappeared' are those whose remains are now being unearthed in mass graves all over Iraq."

If these numbers prove accurate, they represent a crime against humanity surpassed only by the Rwandan genocide of 1994, Pol Pot's Cambodian killing fields in the 1970s, and the Nazi Holocaust of World War II.

YET THE OBAMESSIAH AND HILLARY AND DEMS SAY WE SHOULD HAVE LEFT HIM ALONE.... SHEESH
A VOTE FOR THE DEMOCRATS IS A VOTE FOR NEW MASS GRAVES IRAQ - EITHER FROM SECTARIAN STRIFE OR A WAR AGAINST AL QAEDA.

VOTE ACCORDINGLY.
Posted by Reliapundit at 10:26 AM

If, according to your citation of Human Rights Watch,(...and since when have you joined the Human Rights Watch crowd?) 290K civilians died from the Iraqi regime over 20 years, that is an average of 14.5K a year.

According to "Iraq Body Count", about 85K Iraqi civilians have died over the last five years we've been there.

Care to reword your statement, "MORE DEFENSELESS IRAQIS DIED EACH YEAR UNDER SADDAM THAN EACH YEAR SINCE SADDAM WAS DEPOSED" ??

THE HRW IS AN UNDERCOUNT.

(I KNEW SOME LEFTIE TROLL WOULD DEFEND SADDAM AND ATTACK THE USA! THANKS DAVEY!)

SOME AS MANY AS ONE MILLION NOT INCLUDING THE IRAN WAR.

THERE GOES YOUR ISSUE DAVE.

AND THAT LIONK IS TO A LEFTIE BLOG.

ONE WHICH USES THE ENTIRELY DISCREDITED LANCET ESTIMATION FOR IRAQIS KILLED DURING THE WAR.

DON'T CONFLATE THE BAD GUYS WE KILLED WITH THE DECENT INNOCENT IRAQIS SLAUGHTERED BY AL QAEDA AND THE SECTARIAN MILITIAS.

JUST AS YOU WOULD NEVER BLAME FDR FOR THE CIVILIAN DEATH TOLL IN WW2 OR 450,000 USA SOLDIERS KILLED IN WW2, YOU CANNOT BLAME BUSH.

ACCORDING TO TESTIMONY BY BLIX AND DAVID KAY, SADDAM WAS IN CLEAR VIOLATION OF SEVERAL OF THE UNSR'S WHICH COMPRISED THE ARMISTICE FORE THE GULF WEAR, HENCE HE PLACED HIS NATION IS A STATE OF WAR WITH US.

The ISG and others have already proven beyond any reasonable doubt - and to a moral certitude - that Iraq was in flagrant violation of UNSCR # 687 (and UNSCR # 1441); therefore a casus belli existed.

This is the entire legal and moral justification for the war. This is true regardless of whether, or not, we ever discover any large stockpiles of WMD.

In my judgment, based on the work that has been done to this point of the Iraq Survey Group, and in fact, that I reported to you in October, Iraq was in clear violation of the terms of [U.N.] Resolution 1441.

Resolution 1441 required that Iraq report all of its activities -- one last chance to come clean about what it had. We have discovered hundreds of cases, based on both documents, physical evidence and the testimony of Iraqis, of activities that were prohibited under the initial U.N. Resolution 687 and that should have been reported under 1441, with Iraqi testimony that not only did they not tell the U.N. about this, they were instructed not to do it and they hid material.

THE WAR WAS LEGAL AND JUST.

THEY DESERVE IT AS MUCH AS YOU, DAVID CYRUS.