Justice League #42 is making me lose respect for Christopher Priest

I thought he was blowing it when he shoehorned Geoff Johns' SJW creation, the Islamic Green Lantern Simon Baz, into the pages of this latest volume that's soon to be cancelled. Now, with issue 42, he's making things worse with the following moral equivalence on Israel and "Palestine", seen in this panel:

This is disgusting. This is precisely one of the problems any realist could have with Islam - that it teaches to live a lie (or, as per the Arabic word for deception, taqqiya), that there was supposedly an Arabic/Islamic country called "Palestine" built on land that's part of Israel. Even Golda Meir made clear there's no such thing. The name was originally conceived by the Roman empire following the defeat of the Bar Kochva revolt in 132 CE, 2nd century. Needless to say, Priest's starting to really lose me with this propaganda stunt, and here when he'd made a valid argument 2 months ago about why writers of black/Asian/Latino descent shouldn't be given ghettoized roles in scriptwriting. This is very sad, and it doesn't stop there. There's also the following conversation between Baz and Jessica Cruz to consider: 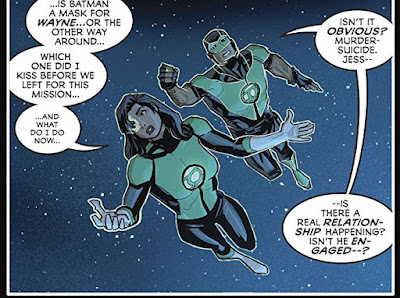 In the second panel, he's making light of murder-suicide, which is offensive to victims of suicide bombings. That's no way to make a character likable, no matter what his religion, and Priest's failure to consider that is stunning. Making Baz tantamount to an anti-Israelist is also very bad. The review of this issue on Geekdad doesn't help, as the reviewers are clueless:


Justice League #42, the penultimate issue of Priest’s run before Snyder, Tynion, and Williamson come in to blow everything up, has a lot to do, and unlike most issues of his run, I’m not sure everything landed. It’s still easily the most ambitious Justice League run I can remember, with an overtly political bent and major developments for multiple characters, but it almost feels overwhelming at times this issue. The opening page of the issue has Jessica and Simon discussing the weird kiss with Batman, which I still don’t quite get. It didn’t seem to go anywhere, and the fact that Jess knew he was engaged (as confirmed this issue) makes the whole plot rather icky. The issue then picks up in the aftermath of Wonder Woman’s shooting, which is revealed to be a near-fatal neck shot. Priest’s take on her powers is that she’s not really invulnerable at all without the protection of her bracelets, which doesn’t quite match up with what we’ve seen – I assumed she had at least some level of innate invulnerability.

So what was that Priest once said about being able to write anything, and doing research? It all depends how well he understands all these world affairs and history, and if he actually was willing to do it. Evidently, he didn't, and that seriously detracts from his credibility.

The review from Inside Pulse also notes:


Speaking of medical help, the Red Lion easily dispatched Cyborg last issue and dumped him in Deathstroke’s room. Slade Wilson explains who the Red Lion is, but also introduces himself to Cyborg so…. that calls into the question the history of the first Teen Titans team of the Rebirth era. [...]

It was bad enough when Geoff Johns had to inject this terrible propaganda into the DCU 6 years ago, topping it off with the cliche of a white supremacist being the real villain in the Baz debut stories. Priest is making things worse by applying ever more revolting personality traits to Baz, and worse, insulting decent segments of society in the process. He must've done this because the volume's being cancelled, and thought it a perfect opportunity to exploit the last issues for such a nasty moment. But all he's doing is suggesting he doesn't have what it takes anymore to do a story right, and if he wouldn't do the research he argued is necessary to turn out a good story, or realize why trivializing serious matters is reprehensible, then he's worn out his welcome and is no longer a good choice for a scriptwriter today. The capitulation to PC propaganda by modern writers is just what's destroying the medium.
Posted by Avi Green at 12:45 PM 0 comments