I met Sheriff Joe in Phoenix, Arizona, in 2010. Everybody loves Sheriff Joe. The only people who don't are the treasonous racist MSM fifth columnists out to destroy our great country!

Here's the headline at NYT, via Memeorandum, "Trump Pardons Joe Arpaio, Who Became Face of Crackdown on Illegal Immigration."

Here's my report from 2010. I had so much fun! See, "Sheriff Joe Arpaio Headlines 'Stand With Arizona' Rally in Tempe." 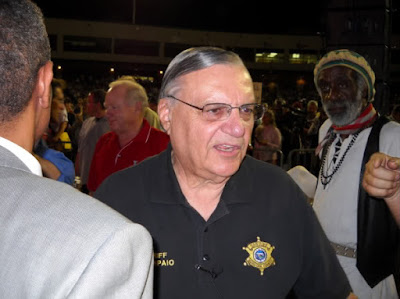 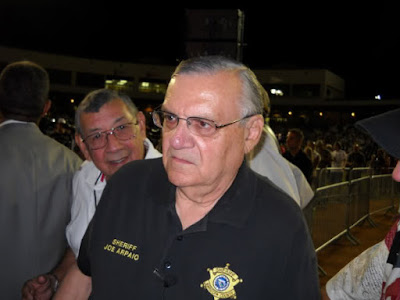 One of the terrorists who plotted the van ramming attack in Barcelona was located by Spanish police and sent to hell where he belongs:


Spanish police on Monday shot dead Younes Abouyaaqoub, the suspected driver of a van that mowed down pedestrians in Barcelona, in a dramatic end to a massive manhunt for the Moroccan national who was wearing a fake suicide belt when he was killed.

"We confirm the death of Younes Abouyaaqoub shot in Subirats," police in Catalonia tweeted.

The Moroccan was the last remaining member of a 12-man cell suspected of plotting last week's deadly vehicle rampages in Barcelona and the seaside resort of Cambrils that were claimed by the Islamic State organisation (IS) -- its first in Spain.

Four men have been detained, while the others have been killed, either by police or in an explosion believed to have been accidentally detonated by the suspects themselves in their bomb factory in the seaside town of Alcanar.

Among those killed in the explosion was a Moroccan imam at the heart of the cell, Abdelbaki Es Satty, Catalan police chief Josep Lluis Trapero confirmed Monday.

Unfortunately, if they continue to allow Islamists into Europe, there'll still be many more to come. So they're going to have to start doing some serious thinking about their futures.
Posted by Avi Green at 1:16 PM 0 comments

What could be the exact politics of Tim Seeley's "Brilliant Trash"?

The comics writer Tim Seeley's been interviewed by the Hollywood Reporter (via Science Fiction) about a bizarre comic he's written up called "Brilliant Trash", which features what appears to be a Muslim teen girl destroying Jerusalem, as seen in the panel posted on the side. This is what the trade paper says this about:


Brilliant Trash, co-created with artist Priscilla Petraites, begins with the destruction of Jerusalem at the hands of a superhuman teenage girl, which introduces a near-future dystopia in which anyone can be a superhero — but only one journalist knows how pricey a proposition that really is. Heat Vision talked briefly with Seeley about the new series.

From the looks of things, it would seem as though this story is about an Islamofascist who declared jihad on the historical Jewish city. The question, undoubtably, is whether it's depicted as an abominable, inhumane act. I should hope so. But according to the following statements from Seeley, this book is supposed to be satire:


The world of the series feels very much like it's prime satire, taking elements of today and ramping them up to 11: Journalists that no one believes! Fractured media that tells everyone what they want to hear! Conspiracy theories where corporations keep information from the people! Does this come from a love of satire, or a sense of "I have to write this now before reality eclipses me in a couple of days"?

It's both! But my favorite sci-fi has always been the material that takes current trends to a seemingly ridiculous satirical end, because those are the things that end up being accurate. We laughed at the ads in Robocop, but they mostly came true. As a person, I have to fight myself not to make fun of everything — but Brilliant Trash allows me to do it, and be absolutely savage about it.

Ha, I never anticipate feedback, because I never know what's going to really sink in with readers. But there's very much a reasoning behind why Lady LastWord [the character responsible for the destruction of Jerusalem] does this, and we'll see that motivation unfold over the course of the first five issues.

I'm not sure what to make of a tale that's built on satire, considering the book involves a serious issue like religiously motivated assault and annihilation. After all, there's nothing funny in real life about jihadists who commit murder in high numbers. Yet we're living in an age when the industry has almost entirely censored the subject of fighting against Islamic terrorism, and if they do address it, they take blame-the-victim paths, as seen in the unreadable Marvel Knights volume of Captain America in the early 2000s. If Seeley's not playing his cards right, then he's only served up another letdown. Serious issues aren't something you should just present as satire.

Since we're on the subject of Seeley, here's a few tweets he wrote in the past week, giving an idea of where he stands on the political map, mostly to the left:


I generally find myself retweeting Trump crits from conservatives. Part of me thinks it means something. Maybe more. Not sure anymore.
— Tim Seeley (@HackinTimSeeley) August 15, 2017

I'm guessing they're RINOs, right? That is, Republicans In Name Only. Among those he retweeted include Mitt Romney and John McCain, the latter who's opposed repairing the damage wrought by Obamacare. I can't say I'm shocked when some mega-leftie considers faux-conservatives the reliable bunch, but not those who actually care about the public's future.


My grandpa fought Nazis in Europe in WW2. Gonna tell him that makes him 'alt-left' now.
— Tim Seeley (@HackinTimSeeley) August 16, 2017

Well my grandpa, who died in 1972, about 2 years before I was born, also fought in the second World War. And labels had nothing to do with it, just altruism, far more than Franklin Delano Roosevelt ever showed. So this is Seeley's way of saying he apparently buys into the notion that Antifa's really a heroic, patriotic movement, when in reality, they're as repellent as the white supremacists who littered up Charlottesville. Even some hardcore leftists admit Antifa's basically the same as those they're "protesting".


Yeah, I wouldn't think Russians have a lot of love for Nazis with that whole Battle of Stalingrad thing: https://t.co/mlMOvlvYXt
— Tim Seeley (@HackinTimSeeley) August 17, 2017

Well at least he's thanking Russia's government for wisely opposing any associations with supremacist news sources, where all their commentary is loathsome as can be. However, he also retweeted this post from Snopes, apparently claiming it's not true what Trump said about Gen. Pershing's war on Islam, hinting he's still part of the anti-Trump crowd. And I think he should ponder that Snopes, in reality, is one of the most dishonest leftist websites around. Definitely not a site I'd consider trustworthy.

Seeley may not be the worst liberal out there in the comics medium, but he may not be the best informed either. And based on what the news is telling about his new comics story, he may not have done a very good job addressing a serious topic. In that case, what would be so "brilliant" about the trash he conceived?
Posted by Avi Green at 1:14 PM 0 comments

I don't know about y'all, but this is why I've been swearing off politics this summer. I've been doing mostly babe blogging ("guaranteed not halal") and books. There's much more sanity that way, lol.

Posted by AmPowerBlog at 12:35 PM 0 comments