An Austrian girl who joined ISIS was murdered by the group while trying to leave Syria:


An Austrian teenager who became a poster girl for the Islamic State has reportedly been beaten to death by the group after she was caught trying to leave Syria.

Sabra Kesinovic, 17, was murdered after she was caught attempting to escape from Raqqa, Islamic State in Iraq and the Levant's (Isil) de facto capital in Syria, according to reports in two Austrian newspapers.

Clearly, she learned what a fatal mistake she made, far too late. If she really didn't like what she was experiencing, she shouldn't have gone at all. This should be a lesson to all women who don't want to live with threats to their lives.
Posted by Avi Green at 3:52 AM 0 comments

I've only gotten around to writing about this a couple days afterwards, but Jonathan Pollard was finally released from prison for his spy scandal.

And I think it'll be appreciated that conservatives in the USA show no misgivings over this, and concentrate on more pressing issues like Islamofascists who could've spied on the USA for autocracies. Pollard for now should be allowed to rest after his release, and we should all put this whole affair behind us.
Posted by Avi Green at 5:30 PM 0 comments

A FAILURE OF INTELLIGENCE, AND WILLINGNESS TO ACT

A writer at the Rubin Center explains why the bloodbath in Paris was able to take place, and why ISIS remains far from defeated:


...Iranian-backed forces — including Lebanese Hezbollah and Syrian President Bashar Assad’s army, backed by Russian airstrikes, were able to break the long-standing ISIS siege of Kweiris airbase to the east of Aleppo city despite ISIS mobilization calls in Aleppo province to counter the offensive. On a more general level, internal documents suggest that ISIS is facing problems of cohesion in its military ranks, as the General Supervisory Committee issued an amnesty for deserters last month, whereas the normal ruling for fleeing from battle without appropriate justification is execution.

While it certainly is valid to point to these developments as setbacks for ISIS, they are too ephemeral in nature to tie them to the Paris attacks in particular. The sophisticated nature of the Paris attacks would have required planning and procurement of provisions predating ISIS’s latest setbacks. Though it will still take time for more precise details to emerge, nothing so far definitely shows that the Paris attacks differ significantly from prior failed plots involving sleeper cells operating in Europe — including returned foreign fighters in their ranks — with suspected links to low to mid-level ISIS operatives in Iraq and Syria.

It doesn't take a genius to point out that the bloodbath came as a result of the upper echelons' refusal to act and arrest anybody threatening religious violence and bar them entry to their country. If the French government wanted to, they could've prevented it long ago. Instead, they acted negligently, and now mass murder has resulted from that staggering failure and cowardice.

If they truly want to convince now, they will pass laws that allow for proper enforcement, and they'll even abolish laws like the ones Phillippe Karsenty was tried under, and let proof burdens lie upon the plaintiffs in a court trial.
Posted by Avi Green at 4:52 PM 0 comments

MUST BE ON ACCOUNT OF THERE NOT BEING ENOUGH GOATS TO GO AROUND... 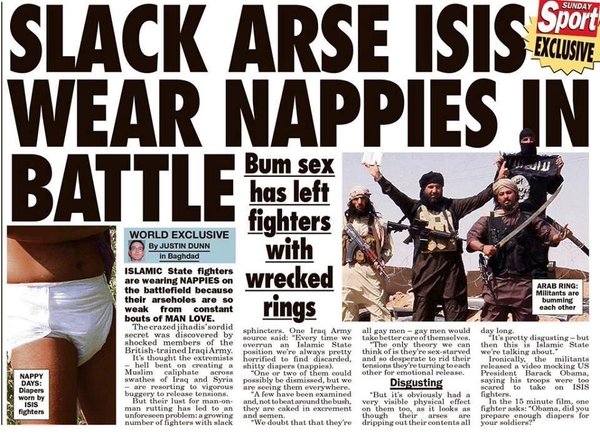 Posted by Reliapundit at 10:23 AM 0 comments