Tariq Ramadan under arrest in France on rape charges

The grandson of one of the Muslim Brotherhood founders has been put in custody in France on charges he raped at least 4 women:


The high-profile Muslim academic Tariq Ramadan has been taken into custody by French police investigating allegations of rape and sexual assault.

Ramadan, a Swiss national who spends a significant amount of time in France, was being questioned by detectives in Paris on Wednesday evening. A preliminary inquiry has been opened after two women filed official complaints last year claiming he violently attacked them. He is also accused of making death threats against one of his alleged victims.

Ramadan, 55, a professor of contemporary Islamic studies at Oxford University since 2009, has strenuously denied the allegations and filed a counter complaint for slander against one of his accusers, the writer Henda Ayari.

The French-born Ayari claims Ramadan raped, harassed, intimidated and sexually assaulted her in a Paris hotel in 2012. The writer, a former Salafi Muslim turned secular feminist, originally detailed the alleged attack in her book, "I Chose to Be Free," published in France in November 2016, but gave her attacker a false name. After the Harvey Weinstein scandal and #MeToo campaign, Ayari named the attacker as Ramadan and made a formal police complaint.

On her Facebook page, Ayari wrote Monday that she had complained to police to "demand justice for the aggression of which I was a victim, as have other women who don't dare report it to the police because they are afraid."

On the French TV channel BFMTV in October, Ayari, 41, described her ordeal. [Link in French.] "I thought I was intelligent. I thought I could protect myself, but I couldn't that evening. He said it was what I wanted. He insulted me and said women like me deserve this.… He said several times that the fact I no longer wear the veil meant I deserved what I suffered. I had provoked his desire and it was my fault…. I was ashamed, I didn't want anyone to know," she said.

A second woman, a 42-year-old Muslim convert whose name has not been released, claimed that Ramadan raped her in a hotel in the southern French city of Lyon in 2009. She has also reported Ramadan to police. Four Swiss women have accused the Islamic scholar of making inappropriate sexual advances at them while they were teenage students in Geneva.

Ramadan, a renowned Islamic theologian and the grandson of Hassan Banna, founder of the Muslim Brotherhood movement in Egypt in the 1920s, is popular in conservative Muslim circles. Israel considers him one of the most important voices for the Brotherhood in the West.

Hold on, what's that? Shouldn't that be "most dangerous"? Because that's what he is, and his violations of women further compound that perception. This'll hopefully ensure his career is over, and he should by all means rot in prison for violating those women.
Posted by Avi Green at 4:50 PM 0 comments

Obama associated with Farrakhan prior to his election 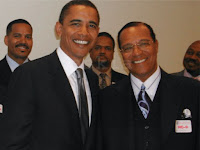 And the news was kept entirely secret for many years so as not damage his electoral chances. Even now, however, there's still plenty of leftist news outlets who've refused to report about it:


A review of media monitoring services reveals that every cable news network except Fox News has thus far ignored or downplayed the story of the suppressed 2005 photograph of Barack Obama with Nation of Islam leader Louis Farrakhan.

The photograph was released last Saturday by a left-wing journalist. To their credit, the left-wing new media, led by Talking Points Memo, did much of the legwork in reporting further details of the story — such as the fact that the Congressional Black Caucus had invited Farrakhan to meet with them, and that the photograph was deliberately hidden to protect then-Sen. Obama’s nascent presidential campaign.

Still, the networks ignored the story.

For failing to discuss the issue, which is very serious, they should be absolutely ashamed of themselves. And all they cared about was Donald Trump's supposed connections with a KKK member despite having no connections and denouncing him in the past. Nobody should be wasting time on channels like CNN if they won't focus on something disturbing like this.
Posted by Avi Green at 4:48 PM 0 comments