The Chinese communists have just revealed they embrace the Taliban in Afghanistan, and want everyone else to do so as well:

Chinese dictator Xi Jinping praised the “sovereignty, independence and territorial integrity” of Afghanistan in a message to a foreign ministers’ meeting featuring a Taliban representative on Thursday, encouraging neighboring countries to “do their best” to support the “Afghan people.”

China is currently hosting a two-day summit in Anhui province of regional leaders to discuss the future of Afghanistan. Taliban “Foreign Minister” Mawlawi Amir Khan Muttaqi arrived on Wednesday and is participating in conversations with China and other top diplomats.

This is definitely bad news. Commies of modern times are definitely taking this world in the direction of darkness and barbarism if this is type of movements China's government is embracing.
Posted by Avi Green at 2:57 AM 0 comments

Will Joe Rogan's enemies thank him for praising Israel?

Podcaster Joe Rogan, who was recently attacked by PC-advocating leftists, made a case in praise of Israel for focusing on more serious issues than what the leftists in the USA do:

Podcaster and media persona Joe Rogan showered praise on Israelis in his recent podcast on March 23, saying their experience in the Middle East's hostile environment has steeled them for the complexities of life and has led them to appreciate it.

The podcast featured a lengthy discussion with tech entrepreneur Antonio Garcia Martinez on a whole range of issues, including the influence of progressives on the daily discourse in the United States, which according to Rogan, sometimes results in "nonsense problems" taking center stage. At one point, Rogan, said that Israelis generally don't have debates over gender pronouns and other progressive matters, because of the other problems in life, recalling the impression he got from an Israeli friend's attitude toward life.

Read the rest. I don't suppose Dwayne Johnson, Neil Young and Ava duVernay would be willing to apologize to Rogan after all the trouble they - and other such leftists - caused him over stuff they hold a hypocritical position upon? This is very impressive stuff Rogan's brought up, and he should be admired for it. Something the majority of Hollywood tragically won't do. Those Hollywooders who attacked Rogan should be ashamed of themselves.

Update: Rogan also deserves praise for raising the issue of transsexual men robbing women of victory in sports.
Posted by Avi Green at 2:55 AM 0 comments

The 3rd volume of Green Lantern from 1990-2004 has long been notorious for plenty of reasons, from the stealth leftist politics and other smutty elements Gerard Jones injected, to the repellent fridge story Ron Marz wrote in 1994, but in addition to that, there was also a short story starring Kyle Rayner, Hal Jordan's tediously scripted and forced replacement circa Emerald Twilight, that was just as dreadful as what the flagship series turned out to be. The tale in question comes from DCU Holiday Bash, published in early 1997, 1st of 3 specials from the late 90s, and was written by Michael Jan Friedman, a book writer who'd worked on a few comics in the 90s (including The Darkstars, which became something like a refugee camp for former GLs and even a depowered Donna Troy in its latter half), and judging from how insulting to the intellect the tale was, Friedman was hardly an improvement over Jones and Marz. Here's 3 panels from the story in question, which wasn't much more than 10 pages. It chronicles Kyle going to retrieve an oil vessel used for the Hanuka holiday from some neo-nazis who'd stolen it from a synagogue. Let's begin with this scene: 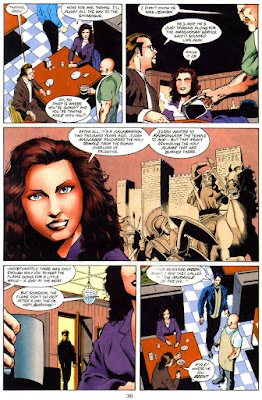 So what we have here are a few people preparing for the Hanuka holiday, with the woman discussing how great it is, and the script hits a historical pothole when she's written telling how Judah the Maccabee fought against the "Roman overlord of Palestine". Say what?!? So Friedman was perpetuating the falsehood of using a name the Romans invented for delegitimizing Israel in ancient times (not that he actually acknowledges that, of course), and to add even more unintentional comedy to the mix, he never did any proper research to comprehend that the empire occupying Israel at the time was the Greek-descended Seleucid empire, led by Antiochus III. Why, if that's supposed to be Judah atop the horse there, I'm equally put off by how he's made to look like he's wearing an Arabic keffiyeh on his head, a depiction that's admittedly occurred in other 20th century depictions of ancient Israelites too, but doesn't offer an accurate portrayal. I thought it was bad enough Jones basically invalidated Israel by not bringing up the name in his writing, in an early effort to ramrod the whole false narrative of a palestinian Arab/Islamic people that's become a common falsehood for years, into mainstream comics. With this, it looks as though Friedman also comes from a monumentally cynical leftist background, and saw nothing wrong with injecting some of his own contempt into another GL story he'd written up. Now, here's the second panel: 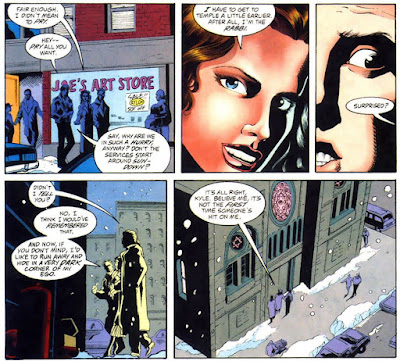 Here, Kyle discovers the lady is a female rabbi, which in Hebrew/Yiddish could be pronounced rebbetzin, and it's made out to look like such a religious figure shouldn't be asked on a date any more than a Catholic nun. This also had me groaning, because unlike the setup the Roman Catholics go by, in practically all sects of Judaism, rabbis and rebbetzins can marry. Even in the Reform sect, which I assume is what the lady is meant as an allusion to. The only hurdle is whether the suitor can convert to Judaism.

Curious thing about this story is that it's a rare moment I know of where Kyle almost ended up dating a lady guest who wasn't an established DCU cast member, yet the writers and editors involved instantly back away from any such possibilities. Which, in all due honesty, is as pathetic as the rest of the Rayner era. That aside, I wonder if DC published this story as a shield against all the GL fans who took offense at the abuse they'd heaped upon Hal, no matter their personalities or conduct. Well if so, then let me just say that, as somebody living in the land where Jerry Siegel and Joe Shuster's ancestry came from (Hal's co-creators John Broome and Gil Kane were also of Jewish descent), I find it most extremely objectionable they'd use anything to do with my ethnicity and/or country's founding religion as way to hide from criticism of bad directions. It's simply unacceptable, yet judging from what we've seen in more recent times, such tactics have become the norm in ways much more grimy than before. Criticize poor writing and direction involving a POC/LGBT practitioner introduced in a forced and contrived manner to check a diversity box, and the left wants to call even the most honest and law-abiding person who dares do so a racist/homophobe/transphobe/islamophobe. Not because they think it's true, but because they want that to be the case. It's utterly shameful. And here, if this 1997 story were anything similar, the worst thing about it is the inaccurate history and other details used in the process. Now, the third panel: 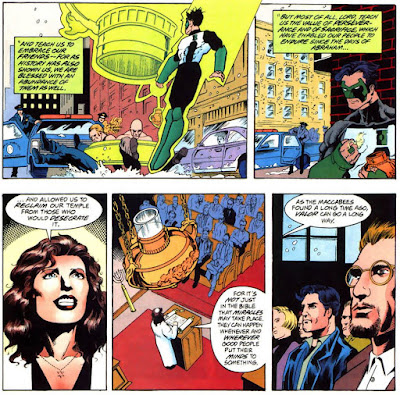 After capturing the neo-nazi thugs thanks to what must've been a holiday miracle of finding reserve energy in his power ring (it seemed to short out momentarily while he'd raided their lair), Kyle returns the valuable to the synagogue, where the female rabbi is then seen at the end doing prayer recital, and while it may not be visible in the front-based illustration, you can see from the back she's wearing a Judaist skullcap, which is accepted in the Reform sect, and some rebbetzin in their movement do wear skullcaps. Though why nobody working in comicdom on tales like this wants to acknowledge that is beyond my comprehension. And that's what makes this story all the more laughable, IMO. That there's only so much space an editor can provide in a book like this is no excuse.

Wow, I thought it was bad enough when Jones was in charge of the GL franchise at the time he was assigned, and if sales plummeted while he was writing, his flaccid scripting was the culprit. And Marz's work wasn't any better. But if this is any indication, Friedman also had some appalling approaches to writing sans any good research or sense of respectability for history. Looking back, it's amazing Hal Jordan never seemed to turn up directly in stories like these, and if not, that's actually a good thing. Sure, some could argue a story like this doesn't have anything that couldn't have been done with Hal, and it's not like he never appeared in stories with political allusions decades back, but seeing how shoddy these 90s tales truly were, that's why it's better if Hal didn't appear in them at all. If anything, such tales are symbolic of what went wrong in the 1990s, and how it affected future storytelling going forward into the current century.

Tuesday's terrorist attack leaves no doubt that fear has returned to Israel's streets. In the three attacks that took place within the past week, 11 Israelis in three different central Israeli cities were killed. And yet, the Bnei Brak terrorist attack was somewhat different from those in Beersheba and Hadera, because the perpetrator was not an Arab Israeli, but a 27-year-old Palestinian, a resident of the Arab village of Ya'bad, who had previously managed to cross into Israel illegally.

Yes, the Shin Bet faces a significant legal barrier in monitoring Arab Israeli citizens, but it can in no way be a valid excuse when it comes to a Palestinian infiltrating Israel with weapons and carrying out a deadly attack in civilian population centers.

What highlights the failure further is that the defense establishment was aware of the terrorist, who had been imprisoned in Israel before, and should have been closely monitored by the Shin Bet, especially in light of recent events.

Until Tuesday night, the defense establishment hoped that the deadly attacks within the Green Line that had been carried out by Islamic State sympathizers would not motivate Palestinian copycat attacks, but prepared for this scenario nevertheless. This was one of the reasons the Israel Defense Forces decided earlier this week to reinforce four battalions in Judea and Samaria. The same reinforcement units were also assigned the mammoth task of reducing as much as possible the illegal crossing into Israeli territory.

The Shin Bet's difficulty comes as no surprise. For years, Israel has chosen to turn a blind eye to the breached security barrier, partly because illegal immigrants make a living in Israel, and the better the economic situation in Judea and Samaria, the fewer chances for a terrorist attack. But this has meant that easy access to Israel can be exploited by terrorists.

Many of the illegal immigrants in Israel were shielded by the leftist courts over past years, that too has resulted in serious damage to south Tel Aviv, in example. Just as disturbing are the businesses willing to employ interlopers.

The authorities have arrested several suspects in the terrorist attack in Bnei Brak, but coming after the tragedy rather than preventing it is not enough. Stronger security is needed to deal with these horrors, and the Bennett/Lapid government is not qualified for the job.
Posted by Avi Green at 2:21 PM 0 comments