The terrorist who stabbed a guard at the central bus station in Jerusalem has been indicted:


A Palestinian terrorist was indicted in a Jerusalem court on Thursday for stabbing a security guard outside the capital’s central bus station earlier this month.

He was charged with “a terrorist act of attempted murder” and entering Israel illegally.

According to the charge sheet, on the morning of December 10, 24-year-old Yasin Abu al-Qar’a “said goodbye to his loved ones on the phone,” purchased a knife and illegally traveled to Israel in order to carry out a terror attack in response to US President Donald Trump’s decision to recognize Jerusalem as the Israel of capital.

After hearing the announcement, “the defendant planned to stab as many Jews as possible until he was killed and turned into a martyr,” the indictment read.

The Shin Bet security service blamed “the incitement on the internet following the recognition of Jerusalem as Israel’s capital,” saying it contributing to al-Qar’a’s decision to carry out the attack.

The night beforehand, he posted on Facebook: “In your path, O homeland, O Jerusalem, O Al Aqsa, our blood is cheap.”

Last I heard, the guard's health was improving, though he's still in the hospital. The terrorist, on the other hand, should have his legs broken and put in a wheelchair to make him less of a threat. Yes, seriously, that's the kind of punishment these savages should receive.
Posted by Avi Green at 2:10 PM 0 comments

Vice's Motherboard section paid lip service to another Islamist who believes there just have to be more Muslim superheroes and such in comic books, while giving ethnicities and nationalities a pass:


When Safiyya Hosein, an avid reader and comics writer, started to get frustrated with how Muslim characters are represented in fictional stories, she decided to help change the narrative.

We've heard that before, even as both Marvel and DC alike already pandered to the demands of whiners like her.


Hosein’s study is mainly centered around depictions of two Marvel Comics heroes: Dust from the X-Men series, who wears a niqab and can turn into living sand, and Ms. Marvel, a Muslim Pakistani-American shapeshifter. She recruited 10 participants between the ages of 18 to 28, mostly around Ryerson’s Toronto campus, through flyers and talks in classes. She showed them a presentation about the two heroes, and interviewed them about their perceptions. 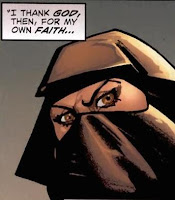 Ah, now on this, there's some very irritating background to Dust's creation. Ethan Van Sciver, the purported conservative, served as the artist on New X-Men #133, where she debuted. An early product of Marvel's own social justice machine, and of leftist Grant Morrison, and decidedly an embarrassment upon Van Sciver's resume. I gotta wonder, does Van Sciver have any regrets about participating in propaganda that's hurtful to victims of Islamofascism, not the least being Muslim women themselves? Interestingly, Dust/Sooraya Qadir hasn't appeared wearing a niqab at all times, and her identity therefore is known, but even so, if anybody involved in that propaganda and SJW mishmash at Marvel was trying to make it seem as though Muslim women haven't ever been oppressed by their own men in any way, then they only made the situation worse.


Hosein said that most of her participants really connected with Ms. Marvel, who is presented as a typical down-to-Earth teenager from New Jersey and addresses themes of identity and religion.

Then how come they're not buying it? My guess is that even Canadians couldn't stomach the political propaganda virtually the entire series is built around, and that's why it ultimately bored so many in slumberland.

That said, it turns out the propagandist in Canada isn't so impressed with Dust, despite how it otherwise does serve a propaganda purpose:


Dust, on the other hand, represents a more tokenized Muslim identity that isn’t well represented, Hosein said—most of her participants didn’t find her relatable either. She thinks her depiction is orientalist, which shows in the fact that her powers are directly related to sand and deserts.

She chose to focus on Muslim women because they’re depicted in a lot of stories as needing to be saved from oppression. In Dust’s comic debut, she is saved from the Taliban by Wolverine while unconscious. “There was always a fascination with Muslim women in popular culture as oppressed,” Hosein told me.

Hosein thinks that when creators aren’t familiar with the community they’re writing about, it’s more likely that that representation will be inaccurate or stereotypical: “There's never been a Muslim that's been [Dust’s] creator, and it shows,” Hosein said. 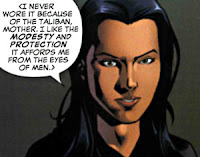 No, but the creation, such as it was, otherwise excused Islam by depicting Dust as observant and viewing the religion positively, and characterizing her as wearing her niqab because she doesn't want men to see her, and not because the Taliban wanted it. Oh, and this picture demonstrates that they did depict Dust sans niqab, something not all Islamists would appreciate.


Ms. Marvel, on the other hand, is co-created and written by Muslim women, which she said has caused the character to be written in a much more sensitive and realistic way. Still, Hosein points out that though Ms. Marvel’s stories address stereotyping of people of colour in general, they haven’t directly addressed the everyday Islamophobia that American Muslims face. “Ms. Marvel is an American superhero at the end of the day, so why don't we see her address this reality that so many Muslims live with and live in fear of?” she said

That's odd, I thought they did. If anything, in one of the first issues, an "infidel" plays a joke of giving her food to eat or drink mixed with non-halal alcohol, and typical white Americans were portrayed pretty negatively. And the election issue certainly came close to serving the kind of leftist propaganda people like her condone. I guess that basically confirms how SJWs won't be satisfied either way. The propagandist at Vice also points to something she's condoning at DC:


If she had the chance, Hosein would want to further study the representation of Muslim men, who are often depicted as violent and uncivilised—though there are some exceptions, like the Green Lantern Simon Baz. Even in these stories of female Muslims being freed from oppression, the underlying message is that they’re freeing themselves from oppressive men: “When you think about that, what does that say about Muslim men?” she said.

Yep, as I figured, there are Islamists out there who'd consider Simon Baz a character who represents their beliefs in some way or other. But what she misses, deliberately or otherwise, is that in stories like the New X-Men propaganda brewed up by early SJWs, the religion itself isn't actually described negatively. Rather, it follows the narrative compounded by Dubya that a "great religion was hijacked".

And on this note, let me make clear that, while I do think it's regrettable Van Sciver's had problems with SJWs and/or ultra-leftists, I don't think his participation in developing Islamic/leftist propaganda can be excused so easily, unless maybe he's willing to apologize and admit he made a mistake. What his recent run-ins with the left demonstrate is that, no matter how much he may participate in developing propaganda the left upholds, it won't guarantee they'll respect him by any stretch. In fact, save for maybe a few issues he drew of Impulse early in his career, there isn't much else in his resume I find appealing. I certainly have no interest in the Green Lantern books he drew for Geoff Johns, who created the Baz character and laced with leftist propaganda from the get-go. Maybe if Van Sciver would consider taking his talents to a smaller company with more respectable writers involved, and offering his services there, I could consider. But not as things stand now, unfortunately.
Posted by Avi Green at 2:07 PM 0 comments

Justice League #34 may feature Islamic terrorists, but still does enough to dampen the topic

Now here's something where veteran Christopher Priest almost succeeds in offering bold subject matter within the pages of the current Justice League volume, but there's still elements in here that take away impact, and do a disfavor to Wonder Woman in the process. For example, let's take a look at the picture below: 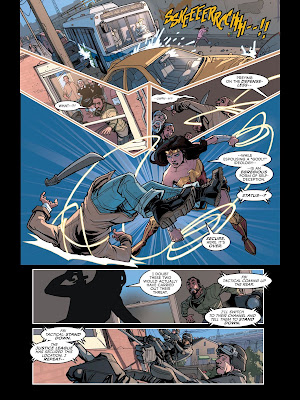 So two jihadists are holding some hostages - mainly two Christian nuns - and Wonder Woman takes the task of finding her way inside to stop them. But the mistake made is that they make her sound naive, which has become a troubling cliche by now. She says, "Praying on the defenseless while espousing a 'godly' ideology is an egregious form of self-deception." Which sounds like the kind of propaganda you might hear bad European politicians mouthing off, or even the weak statements from Dubya that he believed al Qaeda "hijacked a great religion." To make matters worse, Diana even says she doubts the terrorists would carry out their threat. It makes little difference how you look at this from a modern perspective; making WW sound so naive, not confronting the issue with a proper awareness of the barbarism and suicide mentality jihadists can go by, only makes her look idiotic and not well educated or trained at all.

And then, another problem is that the book just had to include DC's most notable apologia creation, Simon Baz, the Muslim Green Lantern. On which note, I recently found the following screenshot on Twitter, and guess what kind of person's upholding the Baz character, seen at the beginning of the issue doing Islamic prayer on another planet while wearing an odd outfit that looks like an Egyptian mummy: 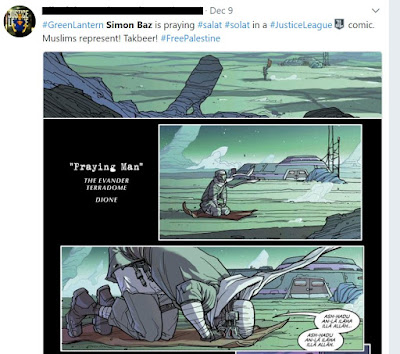 See the hashtag in the text? "Free Palestine"? Yep, that's the kind of people lauding Geoff Johns' badly crafted character. Anti-Israelists. And if Johns and company do nothing to distance themselves from such a bunch, that's one more reason why I see no reason to support this dismal excuse for a science fiction adventure.

Back on the story itself involving Diana's encounter with the jihadists, it ends with one of them getting hold of her sword and using it to stab one of the nuns to death after the police throw in some flash bombs, and Batman arrives too late to stop him either. I don't think WW couldn't accomplish the raid so incompetently, which, coupled with the naive view of the jihadists, is hugely disappointing. She may not be as fast as the Flash, but her speed is still good enough to bring down the terrorists without serious risk that they'd manage to claim an innocent's life.

The following description from the reviewing site of Batman doesn't sound any better:


But I’m not that interested in a series in which we have to watch Batman crying some man tears over his terrible situation. [...]

If he's depicted as a sobber, that's another minus detracting from this whole story, which is apparently setting up "The people versus the Justice League". It may have been done before, but this is already becoming too much.

This could've been a nifty story where the League would have to bring down some Islamic jihadists, but I think they've blown it all the same, because political correctness unsurprisingly dictated the writing.

Diversity and Comics had the following to say in this video:

He seems to understand what's wrong with this whole mess, and why the dialogue simply doesn't do the subject matter...justice. Not even for Wonder Woman and Batman.
Posted by Avi Green at 10:22 AM 0 comments