Caroline Glick tells how French president Emmanuel Macron is endangering the region - and come to think of it, his own country - by validating Hamas:


Macron’s skillful diplomacy and fine judgment was on display once again on Tuesday. Standing next to visiting Israeli Prime Minister Benjamin Netanyahu, Macron decided that the best way to prove his importance was by attacking Trump.

This time Macron didn’t do it by physically assaulting him on live TV. Instead, Macron chose to blame Trump for the lethal consequences of Hamas’s three-month-old terror operation against Israel along the Gaza-Israel border.

Some 110 Palestinians have been killed by Israeli forces deployed along Israel’s border with Gaza to protect Israel from Hamas penetration and terror. Hamas has acknowledged that at least half of the fatalities were its terrorists.

In the framework of this ongoing operation, Hamas buses hundreds of non-combatants to the border to serve as human cannon fodder. Hamas terrorists, interspersed among the crowds, use civilian cover to launch various types of assaults against Israel. These assaults have included border infiltration, mortar and rocket attacks, Molotov cocktails, and destruction of sections of the border fence.

Over the past week, the center of Hamas’s efforts against Israel moved to environmental terrorism. Hamas terrorists have launched hundreds of kites carrying Molotov cocktails and other incendiary devices across the border. Thousands of acres of farmland and nature reserves have been scorched.

Standing next to Netanyahu on Tuesday, Macron ignored all of that. He alleged that Hamas’s violent assault against Israel is a consequence of Trump’s decision to move the U.S. Embassy in Israel to Israel’s capital city, Jerusalem, on May 14. Macron claimed that the embassy move provoked violence and did not promote peace.

In his words, “If this leads to people dying it’s not a celebration.”

*Ahem* If the Hamas encourages/pressures anybody to commit violence in the name of racism and evil, that's what should not be celebrated. Yet this man now crosses the line with deplorable statements against the POTUS, and it goes without saying that not only are Macron's statements offensive, but he also owes Trump an apology.


Macron’s statement was not an isolated attack. Speaking at a conference in St. Petersburg on May 25, he called the embassy move “an error,” and said that the U.S. could no longer be considered an honest mediator in future negotiations between Israel and the Palestinians.

Last week, France voted in favor of a Kuwaiti-sponsored draft resolution at the UN Security Council which called for UN Secretary General Antonio Guterres to produce a written report within 60 days on ways to ensure “the safety, protection and well-being of the Palestinian civilian population under Israeli occupation.”

That draft resolution failed to mention Hamas by name or note that Israel removed its military from Gaza 12 years ago. It failed to mention that Hamas has controlled all aspects of life in Gaza since 2007. After ignoring basic realities of life in Gaza, the draft resolution instructed the Secretary General to include recommendations about “an international protection mechanism” for the Palestinians against Israel in his written report.

U.S. Ambassador to the UN Nikki Haley, who vetoed the resolution, called it “grossly one-sided and morally bankrupt.”

I think Macron's got it all backwards. A government like his cannot be considered reliable, and now he may have forced Jewish residents of France to conclude they'll have to continue leaving the country while Islamofascists continue to endanger the rest of the population. He should be ashamed of himself, and the time has come to call him out on how incredibly dangerous his policies are. The anti-American approach politicians like him have been going by has got to stop. And again, Macron should apologize to Trump.
Posted by Avi Green at 3:53 PM 0 comments

Bounding Into Comics and Douglas Ernst posted some screencaps of messages written by Marvel editor Sana Amanat, just shortly after C.B. Cebulski boasted the former House of Ideas was behind alleged diversity: 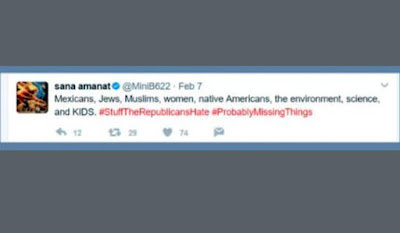 She perpetuates the falsehood that Republicans are nothing but racists/sexists on the one hand, and babbles that one day everyone will be "brown". And even claims she supposedly doesn't advocate Islamic sharia. And Marvel continues to keep her on their payroll? This sure doesn't make me feel encouraged to buy their modern output again. BIC says:


Can Marvel really be 100% diverse when people like Sana Amanat are working at the company and believe “diversity is stupid.” Can Marvel be 100% committed to diversity when Sana Amanat claims she wants everyone to be “brown?” Can Marvel be diverse when their Director of Content and Character Development thinks Republicans hate “Mexicans, Jews, Muslims, women, native Americans, the environment, science, and KIDS?”

It doesn’t look like Marvel actually embraces diversity on any level. They don’t really want racial diversity. And they surely don’t want intellectual diversity. Like many people who share her point of view, they’re looking for lockstep conformity to their own worldview. It reminds me of a catchphrase from Star Trek’s Borg. “Resistance is Futile.”

They also spoke with artist Jon Malin about this, and he said:


Regarding the publishing end of Marvel, Cebulski needs to focus less on the color of his employees skin or cultural backgrounds and get down to stone cold f****** business. This PC s*** should have ran it’s course when he came on and it’d be laughable if peoples livelihoods weren’t on the line and retailers weren’t falling left and right. We (fans, distributors, retailers, artists, convention organizers, EVERYONE) need absolute KILLERS in Marvel from top to bottom to turn this ship around and it’s overflowing with f****** talks of race, gender representation of it’s employees and other nonsense while the damn ship is sinking. I’m reminded of a quote from it’s former EIC Joe Quesada, a KILLER, when he said years ago…. allow me to paraphrase to make my point…’What the f*** is MARVEL COMICS anyway? They’d be better off calling it PC Comics. At least people know what PC is. I mean, they have Wolverine and Spider-man, and they don’t know what to do with them. That’s like being a porn star with the biggest dick and you can’t get it up. What the f***?'

The mistake Cebulski made besides not cross-examining employees like Amanat was stating Marvel was focused on diversity instead of stating their focus was on entertainment and making the audience happy with decent escapism. However, Quesada's quote is hilarious considering within a short time of his ascension to EIC during 2001-2011, he turned the company very PC, barring depictions of smoking, for example, a very short time after Marvel stopped using the Comics Code Authority. One of the few who was allowed to depict anybody smoking at the time was Brian Bendis when he wrote Avengers. And let's not forget how PC Quesada was with the Spider-Man lore, tarnishing Gwen Stacy before going out of his way to break up Peter Parker's marriage to Mary Jane Watson through a pact with Mephisto. And that's just a few of the examples that took place when Quesada was EIC, and got considerably worse by the late 2000s.

For now, if something's clear, Amanat has to be held accountable for her crude garbage comments, and should be told to apologize, which so far, she doesn't seem to have done. Until then, the audience can vote with their wallets and avoid anything she's working on.
Posted by Avi Green at 1:04 PM 0 comments

PLO leads to cancellation of a soccer match with Argentina

A terrible embarrassment has occurred as an Argentinian soccer team cancelled a game in Israel, caving to threats from jihadists:


The Israeli embassy in Argentina officially announced on Tuesday night that the friendly match scheduled for this Saturday between the national soccer teams of Argentina and Israel has been cancelled.

"The threats and provocations against Lionel Messi, which logically raised fears against holding the game, are not foreign to the daily lives of the Israeli population, whose athletes have often been the target of violence and terror attacks," the embassy said in a series of tweets.

Reports in Argentina on Tuesday night said the match was cancelled earlier following Palestinian Arab pressure on the Argentine team not to play in Jerusalem.

Culture and Sports Minister Miri Regev (Likud) later spoke with the organizer of the friendly [match].

Regev’s office said in a statement following the meeting that she had been told that ever since the Argentine national team announced it would play in Israel, various terrorist organizations have been sending messages and threats to the team’s players and their families, with explicit threats to harm their lives and their family's lives. Among other things, the players were sent videos and pictures of children's bodies.

Minister Regev said, "I hope that Argentina's players will not succumb to the terror threats and to the BDS organizations."

If they have, they've succumbed to utter cowardice in an era when courage is needed. This is another offense the PLO and their minions have committed on their part, for which they have to be condemned, and more sanctions should be imposed upon them.
Posted by Avi Green at 11:53 AM 0 comments

Bill Cosby's already been convicted on 3 counts of sexual assault, and is now awaiting his official sentencing while under house arrest. But look what he had posted on his Twitter page nearly a week ago:

He's giving his support to the overlord of the Nation of Islam? The same man who even defended Mike Tyson after he raped Desiree Washington in the early 90s? Well...I think this says pretty much all we need to know about Cosby's mindset, where he stands and where he's going. In the documentary review I linked to, it says the following:


Kopple gives Tyson credit for his talent and skill as a boxer and provides a context for the violence in his life, but she doesn’t cut him any slack for his rape of beauty contestant Desiree Washington in Indianapolis in 1991. The director also provides the pop-cultural framework for Tyson’s conviction and the six-year sentence he’s now serving, including a chilling clip from a rally in support of Tyson in which Louis Farrakhan defends the boxer by hectoring the women in his audience. ”How many times, sisters,” he shouts, ”have you said ‘No’ and you meant ‘Yes’?”

What Farrakhan did was - and still is - sick and repellent, just as Cosby's backing for Farrakhan is now. Cosby said at least a few more items that backfired big time, and this would have to be the capping of the sewage cover for his undeserved career. He's really done it this time, and only ensure a lot less people will care to check out his past resume. Cosby's sentencing can't come soon enough, and among the things he'll have to be remembered for besides his rape crimes themselves, it'll have to include his support for apologists of the same.
Posted by Avi Green at 9:52 AM 0 comments