This guy is the best!

He lost an eye in combat in Iraq. He normally wears a patch, but as you can see, he did some ultimate trolling for Fourth of July. What a guy!

Posted by AmPowerBlog at 12:58 PM 0 comments 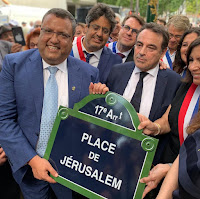 Well here's something to be happy about - the new Jerusalem street in Paris has been made official:


Despite a pro-Palestinian demonstration, the “Place de Jérusalem” plaza was inaugurated in Paris, at the initiative of Mayor Anne Hidalgo.

“In this sad period of recrudesce of racist and antisemitic acts, recalling the ties that unite the city of Paris and the Jewish community is essential,” Hidalgo wrote to the president of the Central Consistory of France, Joel Mergui. The Consistory is the body that represents French Jewry in matters of religion.

“For this reason, your proposal for devoting a square to Jerusalem in the capital seems very sensible, also in order to remember the friendship and the unity between the city of Paris and the State of Israel,” she added.

Upon the approval of Hidalgo’s proposal, Danielle Simonnet from the far-left party La France Insoumise proposed an amendment, requesting that the street sign reads “Place de Jérusalem – with the wish that it becomes the future capital of two states.”

Simonnet’s proposal was rejected, which sparked a large protest from pro-Palestinian associations.

Dozens of people protested against the move, including the Association France Palestine Solidarité, which invited supporters to join the demonstration under the name “No to the confiscation of Jerusalem!”

Jerusalem Mayor Moshe Lion participated in the inauguration event in Paris, following the invitation of Hidalgo.

The plaza, located at the intersection of Rue de Courcelles and Boulevard of Reims in the central 17th Arrondissement, is also the site of the future European Center of Judaism (ECJ), which is currently under construction.

It may not be an embassy move, but as something on their turf, it's certainly a good start in recognizing Jerusalem as Israel's capitol. Especially considering that Jerusalem itself has a Paris Square downtown, and if Israel can recognize Paris as the French capitol, then reciprocation must obviously be the answer.

This is a definite step in the right direction, and with the Jerusalem mayor himself attending. And it's good they didn't allow anti-Israel protestors or the communist Unbowed party to have their awful ways. This is a most vital moment in history, much like the US embassy's move to the capitol.
Posted by Avi Green at 4:42 PM 0 comments