The anti-Zionist, anti-religious Meretz party is forming an alliance with Ehud Barak as his reception began to slip following the news he'd associated with Jeffrey Epstein, all for the sake of toppling Benjamin Netanyahu:


In a dramatic reshuffle on the Left, the far-left Meretz and former Prime Minister Ehud Barak's Israel Democratic Party will be running on a joint ticket in the Sept. 17 election under the name Democratic Union, with Labor MK Stav Shafir as No. 3, the party leaders announced Thursday morning.

According to the agreement reached between the parties, Meretz leader Nitzan Horowitz will hold the No. 1 slot on the list, followed by Shafir. Barak will be placed 10th at his own insistence, according to a statement released by the faction Thursday. He will, however, be guaranteed the first pick of ministerial posts if the party enters the government.

Shafir decided to leave Labor after she failed to convince new Labor chairman Amir Peretz to run on a joint ticket with Meretz and Barak.

What's really disturbing is whether there's a segment of the public out there who're willing to vote for them despite the Epstein scandal. And whether they'll succeed in wiping out the Labor party all for the sake of this. It's a valid worry, and for now, it unmasks Meretz as not true to any claim they make that they're in favor of women's rights, when they're willing to associate with somebody whose own connections are that repellent.

This is decidedly atrocious news, proving how morally bankrupt the left is, and not true to their slogans at all. And what "democratic" values do they actually uphold? None that I can think of.
Posted by Avi Green at 3:43 PM 0 comments

Almost 2 decades after the tragedy of September 11, 2001, Marvel's written up a story in the 2nd volume of Marvel Comics Presents seemingly tying Wolverine's history to the era of the World Trade Center's destruction:


In The Vigil, Wolverine has been fighting the demon Ron Killings once per decade, every decade since the 1940s. The story, originally ostensibly in continuity though seeming less so considering the major changes made to Wolverine’s history, including getting a bunch of X-Men killed in the 90s and having a daughter (with a woman he met as a child – yuck), not to mention the fact that the stories play out in real time, not Marvel time. In any case, in Marvel Comics Presents #7, The Vigil gets to the 2000s, and since The Truth appears at some of the most terrible moments in human history, it seems natural to assume that this decade’s appearance will be at the World Trade Center attack on September 11th, 2001.

And here's a panel from the interiors: 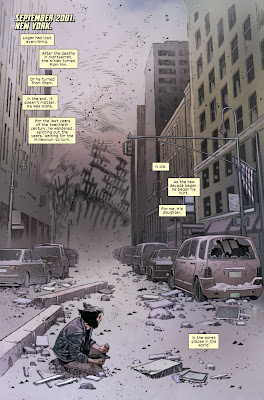 A followup to an earlier story set during WW2 in this anthology, and I wouldn't be shocked if there was no mention of Islam's role in the modern tragedy, one more reason why this is bound to be as awkward as it was to put the Marvel universe in the middle of 9-11, as J. Michael Straczynski and Joe Quesada did in the notorious Spider-Man issue 36 from late 2001.

As I asked once before, and will again, is the The Truth supposed to represent a leftist idea of what amounts to facts? Quite possibly. Which'll confirm Marvel's still nailed on injection of leftist politics into their books, subtle or otherwise. Something we could do without.

And the idea of Wolvie leading to the deaths of several other mutants and possibly having sex with an underaged girl...ugh. That's not making things any better either.
Posted by Avi Green at 3:34 PM 0 comments