US administration closes the PLO's office in Washington

The Trump administration's made another significant landmark decision that's to be proud of: they shut down the PLO's office in the District of Columbia (via World Israel News):


Israeli Prime Minister Benjamin Netanyahu praised the US decision to close the PLO mission in Washington, DC on Tuesday evening.

“The US made the right decision regarding the PLO mission in Washington,” Netanyahu said, according to Israel’s Channel 2. “Israel supports the American actions that are intended to make it clear to the Palestinians that the refusal to negotiate and the attempts to attack Israel in international forums will not advance peace.”

The US announced that it would close the mission on Monday, giving the staff several months to vacate. The State Department said in a statement that the move was directly connected to the Palestinian Authority’s refusal to negotiate with Israel or to consider any peace plan put forward by the Trump administration.

In addition, this makes an important step in shredding the lies of a "palestinian state", as one of the Israeli government ministers puts it:

"This decision joins the decision to recognize Jerusalem as the capital of Israel and the decision to stop funding UNRWA, which is an organization that perpetuates the refugees' pretend right of return," Katz said. "All these steps reach the roots of the conflict and tell Palestinian Authority Chairman Mahmoud Abbas that he can not continue his double-talk."

"Trump is peeling the Palestinian lie like an onion - layer by layer. Their educational system as well teaches their children that 'big Palestine' is from the Jordan River to the sea. Trump comes and says: 'If you want to sit and negotiate, do it from a realistic place - Jerusalem is the capital of Israel, and there is no right of return. Abbas' response shows exactly what he thinks of these issues."

And Abbas should be arrested for the war crimes he committed decades ago, and not recognized as any kind of a leader. He is only a war criminal. The closure of their mission in the US was a long time in coming, and thankfully, it's been done, saving US taxpayers a lot of money.
Posted by Avi Green at 12:42 PM 0 comments 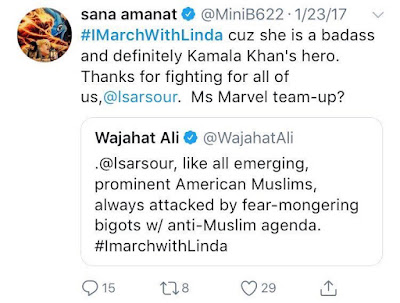 And this is a sad reminder of how the world Lee built up has long been destroyed by these infiltrators who despise all his creations stood for. If these are the people who've become the overlords devastating Marvel from within, that's why it's probably for the best that their demise come sooner than later, rather than have it all turned into a true demon-fest.
Posted by Avi Green at 12:41 PM 0 comments


During this year's 9-11 Memorial service, US ambassador David Friedman spoke in the above video interview about how Israel and the USA share the same tragedies and values. And he's absolutely correct. He deserves much credit for making some important points.

Update: and here's more about this year's 9-11 Memorial service, including Donald Trump's courage to state that Muslim radicals attacked America during 2001:


President Donald Trump proclaimed September 11th as Patriot Day, acknowledging that the United States was attacked by radical Islamic terrorists on this day in 2001.

“Although that fateful Tuesday 17 years ago began like any other, it erupted into horror and anguish when radical Islamist terrorists carried out an unprecedented attack on our homeland,” Trump wrote in his proclamation, noting that the terrorists were “enemies of liberty.”

Here's also news of a memorial service he attended along with Melanie Trump, this year's Flight 93 Memorial service, pictures from the time, the Pentagon's memorial service, notes on how researchers are still trying to identify 1000 victims years later, and an important reminder by a commissioner that jihadists will try to strike again.
Posted by Avi Green at 4:27 PM 0 comments