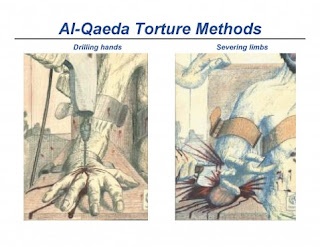 US troops have discovered a building south of Baghdad which is believed to have been used as an execution chamber by Al-Qaeda militants, the military said on Saturday.

"Wild dogs were rampant around the area, which was characterised by a crater where most of the human remains were dumped. Inside a nearby building, the ground forces found blood spatter and other signs indicating executions had taken place there."

The chamber was found during a day long operation earlier this week which also resulted in the discovery of a car bomb factory, the military said.

It said intelligence reports indicated the area was used by Al-Qaeda in Iraq operatives.

Eight suspected militants were detained during the raid, it added.

DO THE DEMS REALLY WANT US TO CUT & RUNS FROM THE MONSTERS THAT DO THIS?
Yes; they do. And letting these islamothugs win in Iraq won't make the world, let alone the USA or the Middle East - a safer place. But the Dems don't care about our safety anymore than they care about the troops. It's all a phony pose. 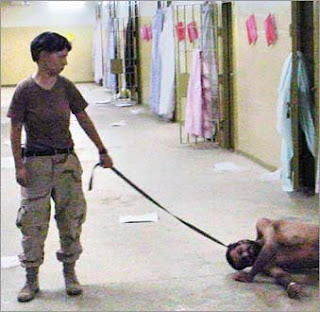 The Dems think that Abu Ghraib was just as bad under US control as it was under Saddam's control. Teddy Jo Kennedy and Little Dick Durbin have said as much.

Abu Ghraib under the USA was just a poorly run prison where a few psycho US soldiers broke the rules. AND GOT PUNISHED FOR IT.

Many Dems who voted fopr the war now say it was a mistake. They say Iraq was better under Saddam. And we were safer. 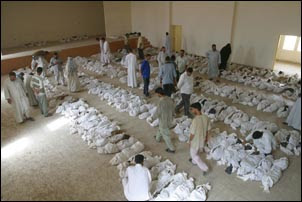 WHY ARE THE DEMS PROMOTING A CUT&RUN POLICY? They are trying to exploit the fact that many Americans are tired of the war --- a war which the MSM tells them they are losing.

Why is the MSM lying? The MSM is dominated by Leftists. All the leftist dominated MSM wants is to get the LEFTIST DOMINATED DEMS back into the White House. All the Dems want is power so that they may inflict their Leftist policies on us:Don't fall for it.
Posted by Reliapundit at 10:47 AM