LEBANON NOT SAFE FOR SAUDI AMBASSADOR

The ambassador of Saudi Arabia, a leading supporter of Lebanon's beleaguered Western-backed government, has left Beirut in the face of attack warnings, a senior Lebanese official said on Saturday. 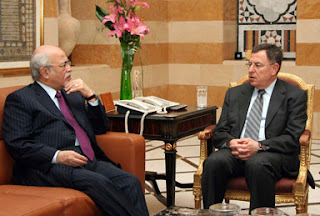 Abdel Aziz Khoja left on August 17 after the embassy formally notified the Lebanese foreign ministry of a "threat of attack against the ambassador's residence, the embassy or other Saudi interests in Lebanon," the official said.

The Saudi embassy declined all comment but Khoja told the Saudi-owned Asharq Al-Awsat daily that "there were threats against Saudi embassy and against my person."

The ambassador had already been threatened four or five times in the past, the London-based paper added.

Oil-rich Saudi Arabia is a key financier of Lebanon and a staunch backer of the government of Prime Minister Fuad Siniora.

This is a threat by Iranian backed Shia thugs against the Sunni Saudis in a place where Iran's surrogates can effectuate a successful attack. On some level, Saudi Arabia and Iran are fighting a surrogate war in Iraq.

There will be no peace in the Middle East until Iran is neutralized. And we don't need to use any ground troops to accomplish this.

Is peace worth it? I think so. Especially when you consider the alternative: a nuclear Iran acting with even greater impunity.
Posted by Reliapundit at 9:03 AM