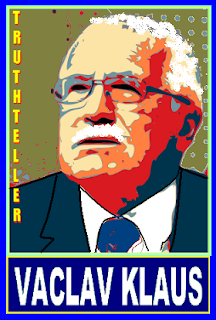 Climate: Czech President Vaclav Klaus once called global warming a new religion, a Trojan horse for imposing a global tyranny worse than communism. Details about the Copenhagen Conference prove how right he was.

The first of three marathon negotiating sessions designed to hammer out the details of the Copenhagen Accord on climate change to be signed in December began on Sunday, March 29, in Bonn, Germany. From what we know, it will be a surrender to tyranny as significant as another negotiated 71 years ago.

A 16-page informational note obtained by Fox News outlines the goals and agenda of the United Nations Framework Convention on Climate Change (UNFCCC), a body paving the way to Copenhagen with good intentions. Behind this alphabet soup is a list of ideas and talking points for what the U.N. calls an "ambitious and effective international response to climate change."

We're not sure how effective it will be, but it's certainly ambitious as it seeks to reorder the world economy in a de facto repeal of the Industrial Revolution. Under the supervision of the U.N., free trade would die, industries that survived could be relocated across borders, and we would have mandatory carbon offsets and cap-and-trade imposed on a global scale.

... Writing in the Financial Times recently, Czech President Vaclav Klaus said: "As someone who lived under communism for most of his life, I feel obliged to say that I see the biggest threat to freedom, democracy, the market economy and prosperity now in ambitious environmentalism, not communism."

Klaus told the Cato Institute recently that "environmentalism is a religion" that accepts global warming on faith and seeks to exploit it to reshape the world and economic social order.

Its commandments are now being written. The U.N. will be its temple and U.N. Secretary General Ban Ki-moon its high priest.

THE POSTMODERN LEFT WOULD HAVE YOU BELIEVE THAT INDUSTRIALIZATION IS BAD - AND AGW IS JUST THEIR LATEST REASON WHY.

BUT BOTH PROPOSITIONS - THAT INDUSTRIALIZATION IS BAD FOR HUMANITY AND THAT HUMANS ARE CAUSING GLOBAL WARMING - ARE DEMONSTRABLY FALSE. 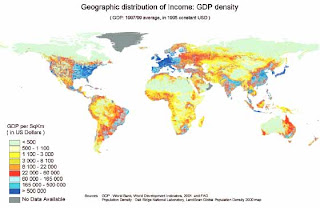 THE ENEMIES OF PROGRESS IN THE THIRD WORLD ARE FIRST WORLD "PROGRESSIVES".

TO IMPROVE THEIR LIVES, POOR PEOPLE WITH SHORT LIFE-SPANS NEEDS TO BECOME GREATER CONSUMERS - OF ENERGY AND EVERYTHING ELSE.

LOOK AT THESE MAPS (RIGHT):

THE LESS CARBON PEOPLE PRODUCE THE POORER THEY ARE. 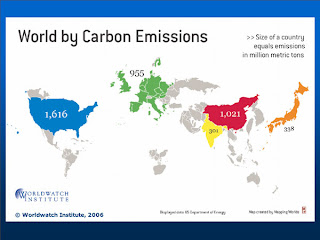 SHEESH: AFRICA DOESN'T EVEN SHOW UP ON THE CARBON MAP!

AND IT'S THE POOREST POPULATED PLACE ON EARTH.

THERE IS A CONNECTION THERE...

AND THE LEFT IS THE "CONNECTOR".

THIS IS WHY - TO LIFT THE REST OF HUMANITY OUT OF POVERTY - WE NEED TO DESTROY LEFTISM.
Posted by Reliapundit at 10:55 AM

Yes, industrial advancement is responsible for increased quality of life, but the outright dismissal of Global Warming as a fanciful and baseless projection of the future is in itself hypocritically baseless. There is sufficient evidence about to cast doubt on the notion that humans are not responsible, at least in part, for climate change.

With that in mind, a transition to more sustainable industry in terms of carbon emissions does not imply a reduction of industry. Instead it is a matter of advancing industry without advancing the dangers associated with it. Even under the circumstances that global warming is bunk (which a great deal of evidence suggests it isn't), the degree of pollution associated with industry (stepping away from the framework of carbon emissions) is remarkable enough that changes need to occur.

If industry had developed unimpeded, we'd never have seen the rise of the middle class which is most responsible for the advances of developed economies. If you look to industrialized nations with a history of communism, you'll note that their quality of life is significantly less, in no small part because of the long-lasting absence of a middle class.

Leftism is not at fault. Both extremes of the spectrum are necessary to balance out the development of a nation.