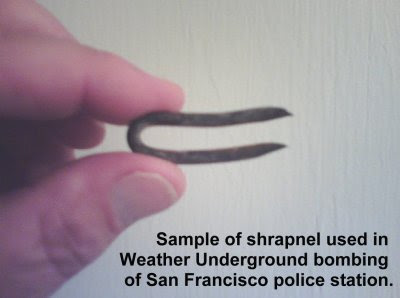 Beverly Person (Band of Mothers) has been keeping me up to date on the campaign against Bill Ayers. Today it's about Naperville High School's invitation to this terrorist nutcase to speak at an assembly of their students.

A confessed and unrepentant domestic terrorist, and accused cop killer has been invited to speak to high school students about social justice.

Did you catch that? I'll repeat: A confessed and unrepentant domestic terrorist, and accused cop killer has been invited to speak to high school students about social justice.

Beverly's (and many others) campaign against this event is showing signs of success. I have already made my calls, it's your turn.

We have received numerous emails and phone calls regarding the proposed visit of UIC professor Dr. Bill Ayers to speak with Naperville North High School students next month, with permission from their parents.

While we firmly believe in exposing students to a wide variety of speakers and opinions, offering them the chance to experience different viewpoints and the opportunity to hone their critical thinking skills (one of the tenants of our mission), please know that we would never invite anyone who advocates violence. Our understanding is that Bill Ayers does not, although this point is being actively debated by several who have contacted us. In addition, administrators from other school districts who have heard his presentation to students, have indicated that Ayers focuses on students being involved in social justice.

Given the interest this has stirred in the community, and the strong emotion and anger that is being expressed, we are currently reviewing this decision and are also exploring options for changing the venue. For those who have expressed concern over funding this, it should be noted that Dr. Ayers was never being paid for this visit.

Once a decision has been made, we plan to update parents of Naperville North students on this issue via Talk203.

It is our responsibility and duty to hound-dog treasonous ingrates like Bill Ayers - to their graves.

UPDATE/(RELIAPUNDIT): WE WON ONE! AYERS DISINVITED FROM BOSTON COLLEGE!
Posted by directorblue at 9:33 AM