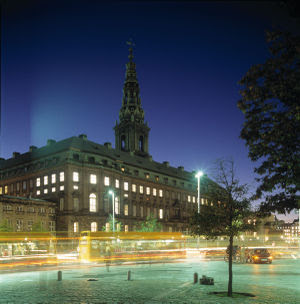 Danes will soon be going to the polls to elect a new parliament - which in turn will create the basis for a (new) government. This time around ethnicity will - again - play a central role in the election.

Since the 1990's the issue of foreigners - especially muslim immigrants - has shifted the balance of power here. It is quite interesting that this issue can be so powerful in a society where such a small segment of the poplulation is foreign.
It began with the fall of the Schluter Government in the aftermath of the Tamil Case, and the Social Democrats assumed power. Ever since the Dansk Folkeparti has taken support from the Social Democrats, and eventually enabled Anders Fogh Rasmussen to assume power, by playing the "race card".

Many parties have now accepted the strict immigration policies put in force in the last decade. Many praties have promised not to alter the taxes paid by homeowners. But there is growing discontent with the present governments "stiff" fiscal and social regime - and a real possibility of a new political constellation. The left continues to make gains from the criticism that the present government has skrimped the health and school system while the State's coffers have burgeoned with surplusses.

There are many undecided voters - and few issues that can swing people around like cultural identity and ethnicity. This time around the race card is not only being played from the extreme right. The extreme leftwing party Enhedslisten is deploying an Islamic-Socialist-Feminist (only possible on the extreeeeme left) Asmaa Abdol-Hamid. If we are lucky her presence on the ticket may drag Enhedslisten out of the Parliament.

The emergence of Naser Khader's Ny Alliance party is placing the race card across the center of the political fulcrum and may very well proove to be the lever that prys Pia Kærsgard and the Dansk Folkepartiet from politcal influence.

No predictions here...it's an 8-horse race with a lot of back room "arbitrage" to be done after the election.
Posted by northern seer at 6:20 AM