The photo from Iraq the mainstream media can't ignore


This is the photo that captured the essence of sacrifice and victory in World War II. 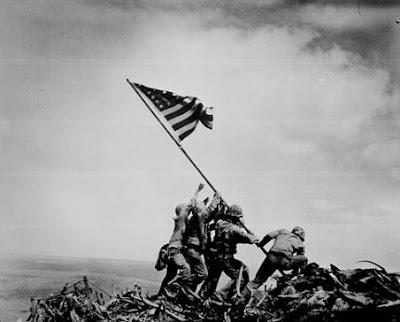 Now the Iraq war, a controversial struggle to free millions from despotism, has its own Joe Rosenthal. This incredible photo was taken by our generation's Ernie Pyle. The best journalist working in Iraq -- Michael Yon -- described this scene:

A Muslim man had invited the American soldiers from “Chosen” Company 2-12 Infantry to the church, where I videotaped as Muslims and Christians worked and rejoiced at the reopening of St John’s, an occasion all viewed as a sign of hope.

The Iraqis asked me to convey a message of thanks to the American people. ” Thank you, thank you,” the people were saying. One man said, “Thank you for peace.” Another man, a Muslim, said “All the people, all the people in Iraq, Muslim and Christian, is brother.” The men and women were holding bells, and for the first time in memory freedom rang over the ravaged land between two rivers.

The reason this photo is rippling through the blogosphere at the speed of light is its resonance. It highights a stunning series of succesess spurred by Gen. David Petraeus' surge... while the mainstream media and Defeatocratic Party remain utterly silent.

Hey, libs… Hear that sound? That’s history rolling on without you again.

The Iraqi people continue to express their thanks to Americans in hundreds of ways. To read a newspaper or visit a movie theater, though, you'd never know it.

Cross-posted at Doug Ross @ Journal
Posted by directorblue at 7:14 AM