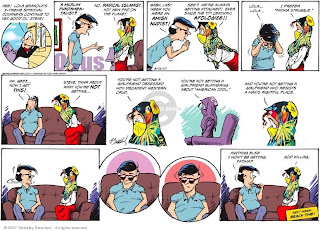 The Sunday cartoonist "Opus" is no conservative but he has just let himself go enough to joke a little about Islam. Bad move! A lot of papers that normally take it will not run this Sunday's cartoon. I have reproduced it above.

There is a full-size version here

As you can see, it is not in fact laughing at Islam. It is laughing at his fellow Berkeleyites, if anything.

Nor is it saying anything controversial about Islam. Muslims themselves make no secret of the subordinate role of women in their society.

But lots of American newspapers are just too uptight to run any humor that involves Islam. Story here

These Sunni and Shia clerics follow sectarian Islam that relies on hadiths for 95% of its jurisprudence. Hadiths were "compiled" 2 to 3 centuries after the prophet. Each sects have hadiths that refutes the other. The prophet never left behind him any hadiths. The only text the prophet and the 4 caliphs left behind and spread was the Koran.

The Koran gave COMPLETE freedom for anyone. I mean anyone so long as the person does not commit violence.

The Quran(Koran) Concerning other monotheist faiths:


Not all of them are alike; a party of the people of the Scripture stand for the right, they recite the Verses of God during the hours of the night, prostrating themselves in prayer. They believe in God and the Last Day; they enjoin good and forbid wrong; and they hasten in good works; and they are among the righteous. And whatever good they do, nothing will be rejected of them; for God knows well those who are God fearing. 3:113-115

Verily! Those who believe and those who are Jews and Christians, and Sabians, whoever believes in God and the Last Day and do righteous good deeds shall have their reward with their Lord, on them shall be no fear, nor shall they grieve . 2:62

Say: "O people of the Scripture : Come to a word that is just between us and you, that we worship none but God, and that we associate no partners with Him, and that none of us shall take others as lords besides God. 3:64

And they say: "None shall enter Paradise unless he be a Jew or a Christian." Those are their (vain) desires. Say: "Produce your proof if ye are truthful."Nay,-whoever submits His whole self to God and is a doer of good,- He will get his reward with his Lord; on such shall be no fear, nor shall they grieve. The Jews say: "The Christians have naught (to stand) upon; and the Christians say: "The Jews have naught (To stand) upon." Yet they study the (same) Book. Like unto their word is what those say who know not; but God will judge between them in their quarrel on the Day of Judgment. 2.111-113

If any do deeds of righteousness,- be they male or female - and have faith, they will enter Heaven, and not the least injustice will be done to them 4.124


The Quran(Koran) Concerning who we fight or don't:

As for such who do not fight you on account of faith, or drive you forth from your homelands, God does not forbid you to show them kindness and to deal with them with equity, for God loves those who act equitably. God only forbids you to turn in friendship towards such as fight against you because of faith and drive you forth from your homelands or aid in driving you forth. As for those from among you who turn towards them for alliance, it is they who are wrongdoers. 60:8-9

Permission (to fight) is given to those against whom war is being wrongfully waged, and verily, God has indeed the power to aid them. Those who have been driven from their homelands in defiance of right for no other reason than their saying, ‘Our Lord is God.’ 22:39-40


2:256 There is no compulsion in religion, for the right way is clearly from the wrong way. Whoever therefore rejects the forces of evil and believes in God, he has taken hold of a support most unfailing, which shall never give way, for God is All Hearing and Knowing.

16:82 But if they turn away from you, your only duty is a clear delivery of the Message .

6:107 Yet if God had so willed, they would not have ascribed Divinity to aught besides Him; hence, We have not made you their keeper, nor are you a guardian over them.

4:79-80 Say:'Whatever good betides you is from God and whatever evil betides you is from your own self and that We have sent you to mankind only as a messenger and all sufficing is God as witness. Whoso obeys the Messenger, he indeed obeys God. And for those who turn away, We have not sent you as a keeper."

11:28 He (Noah) said "O my people! think over it! If I act upon a clear direction from my Lord who has bestowed on me from Himself the Merciful talent of seeing the right way, a way which you cannot see for yourself, does it follow that we can force you to take the right path when you definitely decline to take it?°

17:53-54 And tell my servants that they should speak in a most kindly manner. Verily, Satan is always ready to stir up discord between men; for verily; Satan is mans foe .... Hence, We have not sent you with power to determine their Faith.

21:107-109 (O Prophet?) 'We have not sent you except to be a mercy to all mankind:" Declare, "Verily, what is revealed to me is this, your God is the only One God, so is it not up to you to bow down to Him?' But if they turn away then say, "I have delivered the Truth in a manner clear to one and all, and I know not whether the promised hour is near or far."

22:67 To every people have We appointed ceremonial rites which they observe; therefore, let them not wrangle over this matter with you, but bid them to turn to your Lord. You indeed are rightly guided. But if they still dispute you in this matter, `God best knows what you do."

24.54. Say: "Obey Allah, and obey the Messenger. but if ye turn away, he is only responsible for the duty placed on him and ye for that placed on you. If ye obey him, ye shall be on right guidance. The Messenger's duty is only to preach the clear (Message).

48:28 He it is Who has sent forth His Messenger with the Guidance and the Religion of Truth, to the end that tie make it prevail over every religion, and none can bear witness to the Truth as God does.

36:16 17 (Three Messengers to their people) Said, "Our Sustainer knows that we have indeed been sent unto you, but we are not bound to more than clearly deliver the Message entrusted to us.'

39:41 Assuredly, We have sent down the Book to you in right form for the good of man. Whoso guided himself by it does so to his own advantage, and whoso turns away from it does so at his own loss. You certainly are not their keeper.

42:6 48 And whoso takes for patrons others besides God, over them does God keep a watch. Mark, you are not a keeper over them. But if they turn aside from you (do not get disheartened), for We have not sent you to be a keeper over them; your task is but to preach ....

64:12 Obey God then and obey the Messenger, but if you turn away (no blame shall attach to our Messenger), for the duty of Our Messenger is just to deliver the message.

67:25 26 And they ask, "When shall the promise be fulfilled if you speak the Truth?" Say, "The knowledge of it is verily with God alone, and verily I am but a plain warner."


"And among His signs are the creation of the heaven and earth, and the variation in your language and your colors; verily in that are signs for those who know" (30:22).

O you who believe! Stand out for justice, as witnesses to God, and even as against yourselves, or your parents, or your kin, and whether it be rich or poor. An-Nisaa’ 4:134

"O you who believe! Be the maintainers of justice and bearers of witness for God's sake though it be against your own self, parents and relatives" (4:135).

"O you mankind! We have created you from a single pair of male and female and made you into nations and tribes so that you know each other. Verily the most honored in the sight of God is the one who is most righteous" (49:13).

O you who believe! Stand out firmly for God, as witnesses to fair dealing, and let not the hatred of others to you make you swerve to wrong and depart from justice. Be just: that is next to piety and fear God, for God is well acquainted with all that you do. 5:8

O you who believe, observe your duty to God with right observance, and die not except in a state of submission (to Him). And hold fast, all of you together, to the rope of God, and do not separate, and remember God's favor unto you: how you were enemies and He put love between your hearts so that you became as brothers by His grace: and how you were upon the brink of a fire and He saved you from it. Thus God makes clear His revelations unto you so that you may be guided" (3:102-103).

"The believers are nothing else other than brothers, Thus make peace between your brethren and observe your duty to God that you may haply receive His mercy" (49: 1 0).

Invite (all humankind) to the path of your Lord with wisdom and goodly exhortation and argue with them in the most kindly manner, for, indeed, your Lord knows best as to who strays from His path, and best who are the right-guided. (16:125)

Had your Lord so willed, all those who live on earth would surely have attained faith, will you then compel people, against their will, to believe? 10:99

the koran is full of false facts and lies.,

for example: the koran confuses the ID's of may - the mother of jesus, and mary his disciple.

mohammed was a thief and liar and a pedophile.

he is a false prophet.

jesus was asked how we might know fasle prophets from real prophets.

the fruits of islam are genocide and poverty and ignorance and misogyny and "honor-killings" and so opn.

and mohammed the so-called prophet was either a false prophet or one of satan.

face it. it's the turth.