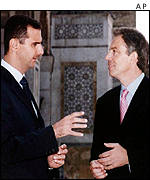 -- CAIRO, Egypt - British Prime Minister Tony Blair arrived in Egypt for Middle East peace talks Saturday, saying the next few days and weeks would be critical in determining whether Israel and the Palestinians can break their cycle of violence.

... He met earlier with his Turkish counterpart, Recep Tayyip Erdogan, who Blair sees as a key ally in the quest for an Israeli-Palestinian peace settlement that could stabilize the whole region.

FACT: Two THOUSAND (2000) Thais have been murdered by jihadists since 2004 - more than in the Holy Land. But Blair and Baker and Carter ARE FREAKIN' SILENT on that issue. And the rest. And this hurts our side. REPEAT: The focus on Israel and silence on the other war-zones hurts our side because WW4 is NOT about the lack of a two-state settlement between Jews and Arabs. WW4 is about global jihad.

AS A MATTER OF FACT, the photo accompanying this post is from a 2001 BBC article TAKEN WHILE BLAIR - (photographed with the serial assasinator-in-chief of Syria - and its dictator, Bashar Assad) - WAS ON ANOTHER MIDDLE EAST TRIP - RIGHT AFTER 9/11! Here's a snippet (BBC - 11/1/01):

British Prime Minister Tony Blair has travelled many thousands of kilometres since the 11 September attacks - round after round of intensive shuttle-diplomacy in the effort to convince wavering governments that the war against terrorism is a good thing.

He is now in the Middle East - Syria was first, next Saudi Arabia and Jordan - and then Israel, where he was expected to repeat his call for a return to dialogue between the Israelis and Palestinians.

WRONG THEN; WRONG NOW! And this mistake - to always focus on the JOOOOOZE instead of the enemy - is one reason we are NOT making fast enough progress in the GWOT/WW4 in this the fifth year of our counter-attack against global jihad.

And that's what WW4 REALLY is: WW4 is the War against Global Jihad. The sooner we focus on the enemy and not pressuring our ally israel the sooner we will WIN.

UPDATE: TRUTH ABOUT ISRAEL HERE, courtesy of VDH, as always...
Posted by Reliapundit at 8:23 AM