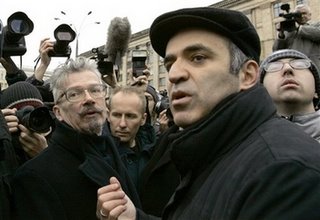 MOSCOW (Reuters) - Russia's fragmented opposition marshalled its thin ranks against President Vladimir Putin on Saturday, but a modest turnout at a Moscow rally -- dwarfed by the police presence -- only underscored his grip on power.

Around 2,500 protesters, their numbers flattered by scores of journalists, were boxed into Triumfalnaya square by several ranks of police with orders not to let them march along the traditional route toward the Kremlin.

"It's just laughable. So many dogs, so many police, all the streets closed off, helicopters flying around. For me, it's paranoia," said former presidential candidate Irina Khakamada.

Laughable from afar, perhaps, but not for the people of Russia. The country went from a Communist dictatorship to a very weak democracy to an authoritarian state. The big test for Russia will be after this next election. Assuming Putin's successor is victorious, will he carry the same favor of the Russian people? (Putin polls 81%). How the next President does, and what he does, in his first few years on the job will give us a good idea of what the future holds for the former Soviet state. 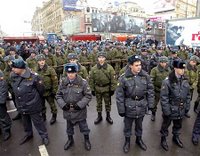 Great post, JR. Also in attendance was a former PM and potential presidential candidate Mikhail Kasyanov. This rally is the opening salvo in the upcoming presidential elections.

Maybe -with our help (as we helped in Ukraine and Georgia and Serbia) - an opponent of Putin's can win? More HERE and HERE. AND HERE, TOO.
Posted by Jim Rose at 4:50 PM