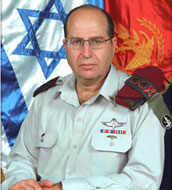 Former IDF chief of staff, Moshe Ya’alon has departed from New Zealand, where he was on a private visit. An warrant for his arrest charging alleged war crimes was issued against him on Monday, for his part in IDF operations in PA (Palestinian Authority) controlled Gaza.

Ya’alon told Army Radio on Friday morning that he was not afraid of the warrant, adding he is pleased that the Government of New Zealand canceled the warrant and did not permit publicity seekers to use the law to benefit their motive.

The GoNZ did the right thing in canceling the specious warrant. Nevertheless, these terrorist worshipping Lefties who tried to get Ya'alon arrested need to be tried themselves for harrassing innocent army officials who're trying to defend innocent communities against violent jihadoterrorists. Perhaps Israelis should file a class-action countersuit against these Leftist jihado-enablers for seeking to make Israel less safe.

Reliapundit adds: Contrast this case to the one below - in which Rafsanjani is indicted by a judge because of EVIDENCE linking him to mass murder. The NZ warrant reminds me of the so-called "peace activists" who set themselves up as "huiman shields" - (a flagrant violation of the Geneva Treaty) - in order to protect Pseudostinians in Gaza, but would NEVER EVER even think of doing the same thing for Jewish targets in Israel. And all their lawsuits challenging the Patriot Act and the NSA Intercept Program, etc., all have the same goal: AIDING THE ENEMY. THUS PROVING THEY ARE NOT FOR PEACE; THEY ARE ON THE OTHER SIDE.

This is not the first time Lefties have tried this tactic: they did it during the Vietnam War. And they did it against Israel and Ya'alon in the USA earlier in the year. IN THE USA!
Posted by Avi Green at 10:51 AM