US FORCES CAPTURE A LOT OF ANSAR AL SUNNAH TERRORISTS 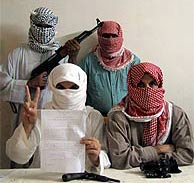 They also captured two terrorist facilitators, a courier, an explosives expert and a financier. The detention of these terrorists delivers a serious blow to the AAS network that is responsible for improvised explosive device attacks and suicide attacks and on Iraqi government, Coalition Forces and Iraqi civilians. The AAS network is also responsible for multiple kidnappings, small arms attacks and other crimes in the central and northern part of Iraq. AAS is considered by some to be a leading terror organization in Iraq

The AAS gang grew out of Ansar al-Islam, and has ties to Iran and al Qaeda - one more reason why talks with Iran, (something that the awful Jimmy Carter and even Colin Powell are advocating), must be opposed.
Posted by Avi Green at 1:43 PM

We cannot and must not talk with Iran. Hopefully Condi realizes what is at stake if we attempt to "negotiate" with people who want to wipe Israel and eventually the U.S. of the map! Hopefully Powell will change his mind. President Carter has lost his mind and should no longer be considered an authority on anything.