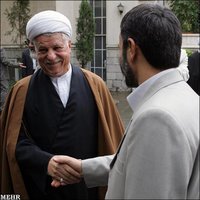 A Buenos Aires court on Friday declared former Iranian President Hashemi Rafsanjani and eight others fugitives from justice in Argentina, where they are wanted in connection with the 1994 bombing of a Jewish cultural center. ... Some 85 people were killed and more than 200 were injured 12 years ago when a bomb exploded in a van outside the seven-story AMIA center in the Argentine capital.

Rafsanjani and the rest of the mullah tyrants of Iran are murderers and terrorist-supporters who should all be brought to justice, indicted, convicted and executed.
Posted by Reliapundit at 10:39 AM