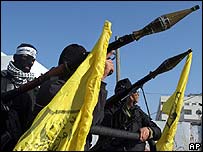 Many MSM news outlets report that "the truce has held."

They report - like the BBC - "Both factions withdrew their troops from Gaza's streets on Wednesday morning, on the first full day of a formal ceasefire."

But there are also reports of continuing gun-battles throughout Gaza.

I guess that these gun-battles don't violate the cease-fire because the truce was only for FORMAL gun-battles between "troops"; now the gun-battles are INFORMAL ones, between "clan members" and Fatah or Hamas "members."

This is truly a distinction without a difference. The fact is, the brutal genocidal thugs of Gaza are STILL killing each other. Who cares HOW they organize themselves - parties, armies, clans?! And who cares how many die?! I don't have a dog in this fight. I hope both sides lose.

Ths BBC article linked to above notes that a few hundred of Gaza's million+ Gazans have staged a rally against the fratricide. I guess these "brave folks" are only happy when Arabs are killing JOOOOOZE.
Posted by Reliapundit at 8:08 AM