BARACK HUSSEIN OBAMA JUNIOR SHOULD WAIT UNTIL 2016 OR 2020 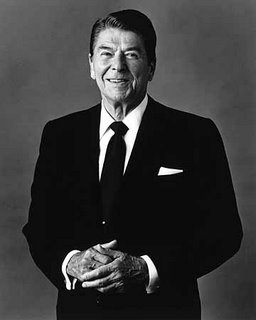 Reagan - known as THE GREAT COMMUNICATOR - made a national name for himself - IN POLITICS - after delivering a famous and prescient speech he gave for Barry Goldwater in 1964 - "A TIME FOR CHOOSING" - (short video here). After that 1964 speech, Reagan ran for governor of California and won. He did not run for the White House in 1968; Nixon won the nomination that year by beating Governor Nelson Rockefeller and Governor George Romney, (and won the election and ran for re-election successfully in 1972 - winning it in a HUMUNGOUS landslide). Reagan ran for the White House for the first time in 1976 - barely losing to INCUMBENT President (by appointment) Gerald Ford. Reagan ran and won in 1980.
The experience Reagan earned from 1964 to 1980 served him well - and the nation, too. And the ENTIRE Free World. AND THOSE WHO SUFFERED UNDER SOVIET TYRANNY! 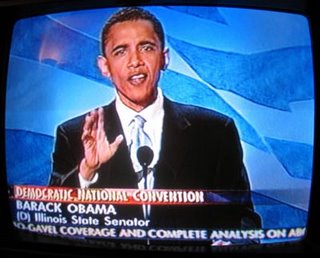 Similarly, Obama made a name for himself in national politics in 2004 with a great speech - his in favor or John "Francois/Genghis Khan" Kerry. He is obvioulsy a polished orator, and a smooth TV personality. Almost as smooth - or slick - as Clinton! Barack Hussein Obama Junior is so smooth that SOME FOLKS ARE PUSHING HIM TO RUN IN 2008!

And between now and then, maybe he should run, win and serve as a governor of Illiinois. The POTUS is, after all, more than a speech-maker. He's the Commander in Chief and Chief Executive of the Executive branch.

ASIDE: OH.... BY HE WAY: Barack Hussein Obama Junior never served in the military.
DOES THAT MEAN HE'S UNQUALIFIED FOR THE OFFICE?

ADDENDUM: RWR is remebered by many for his communication skills. But MOST important was his committment to VALUES. IOW: WHAT he communicated, noit how. Substance, not style. SURE: he had style, but it sereved his message. (Obama has no message yet And no values either!)

Reagan's most powerful sentence was neither long, nor flowery, nor eloquently phrased. Nor did his bureacrats want him to say them!

They were blunt and true and give you goosebumps - looking at them and back at history in the making - because they were so powerfully true that they changed the world for the better.

Listen to them at YOU TUBE. The first link has stills and all the audio.
The second link has just the six words:

"Mr/ Gorbachev, TEAR DOWN THIS WALL!"

also remember, he also said: "the advance of human of liberty can only strengthen the cause of world peace."
true now too!