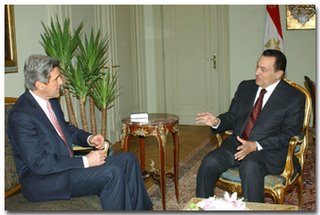 “I think it’s important to talk and have dialogue, but you don’t give up your principles and you don’t make deals that are against your larger interest,” Kerry told reporters after talks with Egyptian President Hosni Mubarak.

BEGIN A DISCUSSION?! Where the eff has this as**ole been for the last 2 decades!?

HERE ARE THE FACTS:

Clinton met Arafat - IN THE FREAKIN' OVAL OFFICE - more often than ANY OTHER FREAKIN' PERSON.

And Clinton's first Secretary of State - Warren Christopher - met with Assad more often than with any other foreign leader.

(And Clinton's second Secretary of State even flew to North korea and had champagne with Kim Jong Il.)

People like Baker and his ISG, and like Kerry, who think we can make ANY progress by talking to Assad or Ahmadinejad or even Kim Jong Il ARE FREAKIN' IDIOTS who have completely forgotten recent history. Idiots, I might add, who have NO FREAKIN' PRINCIPLES. If they did, then they'd refuse to "dialog" with these treacherous and genocidal tyrants. Scum like Assad and Ahmadinejad deserve to be overthrown, not appeased.

[ASIDE: Bush has used the Six Party talks with North Korea and the EU with Iran PRECISELY because of the past failures in direct talks. (BTW: The Left LOVES to call Bush a UNILATERALIST, but the Six Party talks and the EU/Iran talks -- which have been going on (and off and on again) FOR FREAKIN' YEARS! -- are all examples of true MULTIATERALISM. As are our military efforts in Afghanistan and Iraq - if you look at the facts.]

THE DOCTOR AGREES: KERRY IS AN IDIOT. RTWT.
Posted by Reliapundit at 6:48 PM