Cattle-rearing generates more global warming greenhouse gases, as measured in CO2 equivalent, than transportation, according to a new United Nations report released on Thursday. "Livestock are one of the most significant contributors to today's most serious environmental problems," senior UN Food and Agriculture Organization (FAO) official Henning Steinfeld was quoted by the Ghana News Agency as saying on Thursday.

"Urgent action is required to remedy the situation," he said in a statement released by the UN Information Centre in Accra. According to the report, smarter production methods, including improved animal diets to reduce enteric fermentation and consequent methane emissions, are urgently needed. ...

"With increased prosperity, people are consuming more meat and dairy products every year," the report notes. 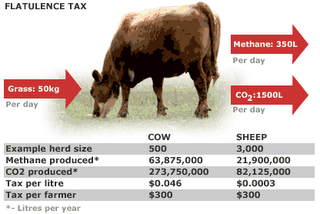 So now, will the Left and the eco-nutsies attack cattle ranchers, dairy farmers and McDonald's, and pass laws forcing us to eat chicken or become vegetarians? I bet they try.

AND GET THIS, Lefties and eco-nutsies in some places - in an effort to reduce livestock flatulence actually passed TAXES on cow farts! Er um, how do they collect it?! Heh. Seriously: I feel that subconciously, most post-modern Leftists and eco-nutsies wish all people were poor, ate no meat, drove no cars, used no electricity. But had free healthcare and pensions. I wish they'd just STFU.
Posted by Reliapundit at 11:08 PM

Oh, so now the lefties acknowledge the "ecological disaster" of cow farts. I remember them laughing at Reagan for bringing this up.

Funny as it may seem, you know who the first major figure was who I recall bringing up the ecological dangers of cow farts? George Carlin, circa 1971, if I am not mistaken.

All those years, all those farts, and here we are. I would swear life is actually sweeter now than it was then.

Bwhahahahaha! Too funny! I have to post a link to this--right now.

from the LINKED2 ARTICLE:

"... the livestock sector accounts for 9 percent of CO2 deriving from human-related activities, but produces a much larger share of even more harmful greenhouse gases. It generates 65 percent of human-related nitrous oxide, which has 296 times the Global Warming Potential (GWP) of CO2.

The report said this accounted for respectively 37 percent of all human-induced methane (23 times as warming as CO2), which is largely produced by the digestive system of ruminants, and 64 percent of ammonia, which contributes significantly to acid rain. "

IOW: cow farts are much MUCH worse than human industry.