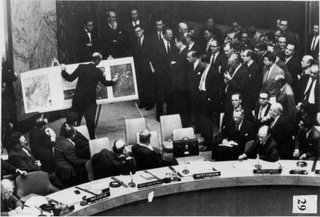 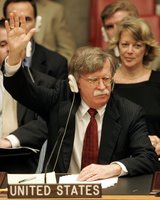 The FACT that Iran is arming the enemy inside of Iraq is making HUGE HEADLINES again, but it's really REALLY OLD NEWS; YESTERDAY:

U.S. officials have found evidence of Iranian support for terrorists in Iraq: brand-new weapons from Iranian factories. According to a senior defense official …

THIS IS FROM 9 MONTHS AGO:

U.S. military and intelligence officials tell ABC News that they have caught shipments of deadly new bombs at the Iran-Iraq border. ... U.S. officials say roadside bomb attacks against American forces in Iraq have become much more deadly as more and more of the Iran-designed and Iran-produced bombs have been smuggled in from the country since last October.

John Negroponte, director of national intelligence, testified before the Senate Select Committee on Intelligence on Februrary 2, saying, "Tehran's intention to inflict pain on the United States and Iraq has been constrained by its caution to avoid giving Washington an excuse to attack it."

[As I wrote then:] Well, that EXCUSE is gonzo, baby: THIS IS AN ACT OF WAR! WE MUST COUNTER-ATTACK!

THIS IS FROM 15 MONTHS AGO:

... new, more sophisticated roadside bombs used to attack American and government forces in Iraq have been designed in Iran and shipped in from there, United States military and intelligence officials said Friday, raising the prospect of increased foreign help for Iraqi insurgents. ... "These are among the most sophisticated and most lethal devices we've seen," said the senior officer, who spoke on condition of anonymity because of the delicate intelligence reports describing the bombs. "It's very serious."

This is what I wrote 15 months ago:

If this it is true, then BOLTON should demand and emergency session of the UNSC and provide the world with evidence, and then demand that the Iranian government close it's border with Iraq or we they will be hit with UN sanctions, and a USA ultimatum: if there is another shipment of IED's into Iraq, then we will attack Iran militarily - destroying ALL their military assets.
On October 25th, 1962 JFK authorized Adlai Stevenson to present photographic evidence on the Russian nukes and to be VERY tough with the Soviets when we discovered the USSR missiles in Cuba. Bush should authorize Bolton to be just as forthcoming (and also to show proof of the claim) and just as tough: by issuing an the above ultimatum to Iran.

Why have a rottweiler like Bolton if we don't use him!?

We should give an ultimatum to Iran's president, Armegeddon-nutjob, and if he fails to respond correctly, then attack Iran. JFK would have the balls to do it. So would Truman. DOES DUBYA?
Posted by Reliapundit at 12:10 AM

The head honchos at the media think that the public doesn't remember those stories. And here's what gets me...Most of the public don't SEEM to remember. Or maybe they just don't care because Iran and Iraq are so far away.

Anybody with a smidgeon of knowledge about Iraq and Iran would have automatically known the Iran would arm the Shi'ites in Iraq. Furthermore, that assistance is easy to accomplish; the border between those two nations is porous.

Bolton's is no longer in a position to demand anything, much less drag the UN through even more American hypocrisy regarding what constitutes an "act of war".

Both America and the rest of the world are better off without the self-serving and logically untenable Bolton doctrine. One hopes that whoever replaces him has a better grasp on their temper, let alone political ethics.