A REAL CIVIL WAR MIGHT BE BREWING, MUCH CLOSER TO HOME: MEXICO ON THE BRINK 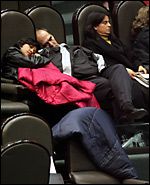 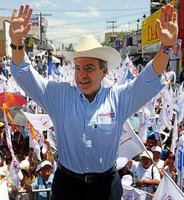 While the "lamestream" drive-by media are preoccupied with the raging propaganda debate, over whether the intersecting armed conflicts in Iraq constitute a "civil war," and while many of the pundits of the partisan blogosphere consider whether a Blue State-Red State "civil war" could erupt in these United States, a real live civil war may actually be brewing just South of the Border - in Mexico.
As blogger "Mark in Mexico" is reporting, the situation in Oaxaca has degenerated into open rioting, and some of the supporters of Andres Manuel Lopez Obrador (AMLO) are openly promising to use violence to prevent the newly elected president's inauguration, and then to make Mexico completely ungovernable.

As the Washington Post reports, this year there have been thousands of brutal drug-related killings in a widespread gangland war, and many citizens feel their country has become lawless.

An ungovernable Mexico degenerating into a chaotic civil war would pose grave problems for the United States.

You think 1,000 illegal border crossings a day is a problem?

What will you do when hundreds of thousands of refugees from a Mexican civil war crush the border crossings at Tijuana and El paso, clamoring for a humanitarian rescue?

Can we absorb one million next year? Two? Stay tuned . . .

[Note: All the photos link to related news items. From top left to right: Leftist legislators attempting to prevent Calderon from taking the oath of office; defeated Leftist, Obrador, at his "alternative" swearing-in ceremony; Calderon - the legally elected president of Mexico; Panhco Villa.]

UPDATE: Here's a link to YOUTUBE/CNN report on the brawl in the Mexican Congress before today's swearing in.
Posted by Punditarian at 8:40 PM