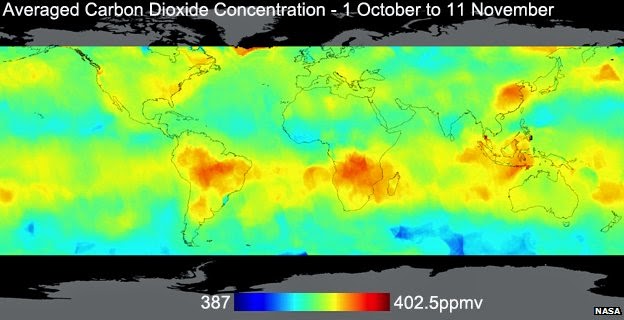 The satellite was sent up in July to help pinpoint the key locations on the Earth's surface where carbon dioxide is being emitted and absorbed.

This should help scientists better understand how human activities are influencing the climate.

The new maps contain only a few weeks of data in October and November, but demonstrate the promise of the mission.

Clearly evident within the charts is the banding effect that describes how emitted gases are mixed by winds along latitudes rather than across them.

Also apparent are the higher concentrations over South America and southern Africa. These are likely the result of biomass burning in these regions.

THE REGIONS THAT ARE RED HAVE MUCH MORE CO2 THAN THE OTHER REGIONS.

THE RED REGIONS ARE HIGH CO2 PRODUCING REGIONS BECAUSE THEY HAVE FOREST FIRES, AND BECAUSE THEY BURN A LOT OF WOOD AND DRIED MANURE AS FUEL: WIKI:


Dry animal dung is used as a fuel in many countries around the world. It is a source of Green fuel used by more than two billion people.[1][2] However, it might have some disadvantages, such as air pollution.[3] As a cheap bioenergy source, it has gained growing interest.[4]


Burning issues: tackling indoor air pollution, 7 May 2011 by The Lancet: "According to WHO, 2 million people die as a result of the smoke generated by open fires or crude stoves within their homes every year. Indoor air pollution has been definitively linked to lung cancer, chronic obstructive pulmonary disease, and pneumonia, the risk of which is doubled by exposure to indoor smoke. More than 900 000 people die from pneumonia caused by indoor air pollution every year. 500 million households worldwide—roughly 3 billion people—rely on solid fuels, such as wood, animal dung, or coal, for cooking and heating. These fuels are usually burned in a rudimentary stove, or in a traditional open fire. It need not be a problem, at least in terms of health. But only assuming the fuel is completely combusted—wood must be dry, and the stove must work efficiently—and there is plenty of ventilation, a spacious chimney, or a sizeable window. In those places where the use of solid fuels prevails, however, these conditions rarely apply, and the consequences can be severe."
"Yet, 'despite the magnitude of this growing problem' notes WHO 'the health impacts of exposure to indoor air pollution have yet to become a central focus of research, development aid, and policy making'....But the past year has had some encouraging advances."
"In September, 2010, the UN Foundation launched the Global Alliance for Clean Cook Stoves....The Alliance—a public-private initiative—brings together partners from the range of specialties across which the issue of indoor air pollution sprawls. There is public health, of course, but also energy, international development, female empowerment, climate change, technology, and business."
"The real benefits will be seen by switching to cleaner fuels and cleaner stoves. Improved stoves—those fitted with fans, for example—combust fuel more efficiently, have lower emissions, and require shorter cooking times."[1]

IF THESE REGIONS HAD MORE INDUSTRIAL POWER PLANTS AND ELECTRICITY THEN THE PEOPLE BURNING MANURE AT HOME FOR COOKING AND HEATING FUEL COULD USE ELECTRICITY INSTEAD,

TO REDUCE CO2 THE WORLD NEEDS MORE INDUSTRIALIZATION, NOT LESS.

EXACTLY THE OPPOSITE OF THE LEFTIST AGENDA.

IF CLIMATE CHANGE HYSTERIA WERE NOT REALLY AN ATTACK ON THE WEST'S INDUSTRIALIZATION - AND AN ATTEMPT OF THE LEFT TO GAIN CONTROL OVER IT, THEN THEY'D BE SUPPORTING MORE INDUSTRIALIZATION IN SOUTH AMERICA AND AFRICA.

THE FACT THAT THEY AREN'T PROVES THEY ARE NOT REALLY AGAINST MAN-MADE CO2, AND THAT THEIR CO2PHOBIA IS MERELY A STRATEGY TO GAIN POWER OVER THE ECONOMY.