PREDICTION: Obama will recognize a de facto Palestinian state before a GOP controlled Senate - (which would vehemently oppose such a deal) - is sworn in


UN Ambassador Samantha Power Wednesday testified to Congress that should the Palestinian Authority be accepted as a nation-member of UN agencies – it hasn’t applied but it might – the United States should break its commitment to defund any UN outfit that recognizes Palestine as a state.

In the event that the Palestinians seek and obtain membership in a U.N. agency, the last thing that we want to do is to give them a double win. And it would be a double win for them to secure a win in an agency on the one hand, and then the exclusion of the United States from that very agency, leaving the agency at the mercy of leadership from Russia, China, Cuba, Venezuela – the countries that tend to fill the space when we depart . . .

THIS IS ESSENTIALLY SIGNALLING ABBAS TO DO JUST WHAT HE STARTED TO TODAY: ACT UNILATERALLY.


The announcement came shortly after Abbas initiated a move to apply for membership in 15 international organizations.

Under the terms of the agreement last July that enabled the current round of negotiations – which is set to expire on April 29 – Israel was to release 104 Palestinian security prisoners in four phases, and the Palestinians were to refrain from unilateral moves in the international arena.

Palestinian officials said Tuesday’s move was a response to Israel’s failure to meet the March 29 deadline for the release of the final batch of prisoners.

... Abbas’s move was announced following a meeting of PLO and Fatah officials in Ramallah to discuss the current crisis in the talks.
Abbas, who signed the applications for joining the 15 international organizations and treaties, said he did not seek a “clash” with the US administration.

The signing ceremony was broadcast live on Palestine TV.

“We want a good relation with the US administration, because it is helping us and making big efforts,” he said.

Abbas pointed out that the fourth batch of Palestinian prisoners was supposed to have gone free on March 29. 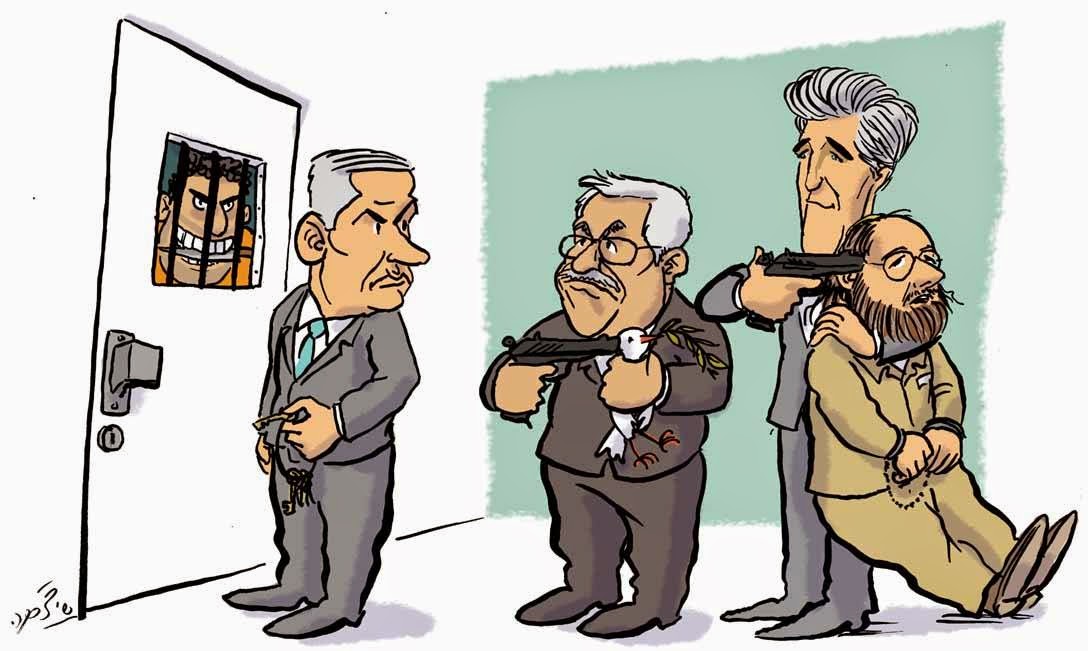 “Since then, we have been promised that the prisoners, who are dear to our hearts and because of whom we refrained over the past nine months from going to the United Nations organizations, would be released,” he said. “Unfortunately each time we are told that the Israeli government would meet to approve their release, but nothing has happened.”

Abbas said that the PA leadership had made it clear that unless the prisoners were released, “we will start going to and joining 63 international organizations and treaties.”

He added that the 15 applications he had signed Tuesday night would be sent immediately to the international organizations and conventions.
The PLO and Fatah leaders voted unanimously in favor of the move.

THE PUBLIC "PROTESTS" FROM KERRY ARE BULLSHIT.

THE SWORN TESTIMONY BY POWER IS THE REAL POLICY.

I FEEL THAT OBAMA AND POWER REALIZE THAT ONCE THE GOP CONTROLS THE SENATE, THEY WON'T BE ABLE TO HELP THE PALESTINIANS AND TO SCREW ISRAEL.

SO, THE CLOSER WE GET TO A GOP TAKEOVER OF THE SENATE, THE MORE OBAMA WILL ACT AGGRESSIVELY AGAINST ISRAEL - HOPING TO SEAL A DEAL WHILE HARRY REID CONTROLS A FILIBUSTER-LESS SENATE.

OR OBAMA WILL PROBABLY RECOGNIZE AN INDEPENDENT STATE OF PALESTINE WITH THE LAME DUCK CONGRESS.

HE WOULD HAVE NOTHING TO LOSE AT THAT POINT:

WITH THE CONGRESS UNDER CONTROL OF THE GOP, HE KNOWS HE WON'T BE ABLE TO DO ANYTHING DOMESTICALLY, BUT WILL HAVE A FREER HAND TO ACT UNILATERALLY ON FOREIGN POLICY.

HIS HEART HAS ALWAYS BEEN WITH THE ARABS.

HIS LONGTIME ASSOCIATES ON THE LEFT - EDWARD SAID AND RASHID KHALIDI AND LOUIS FARRAKHAN AND REV WRIGHT AND BILL AYERS - ARE ALL FERVENTLY PRO-PALESTINIAN AND TOTALLY ANTI-ISRAEL.

OBAMA WILL DO IT AND JUST SAY HIS POSITION "EVOLVED" - AS HE CLAIMED WITH HIS GAY MARRIAGE REVERSAL.