Fitch Ratings warned yesterday that it might downgrade China's credit rating within two years as the country's banks struggle with debt loads following a lending surge to help lift the economy during the 2008 financial crisis.

It also said that Japan, weighed down by a public debt load twice the size of the US$5 trillion economy, faced a greater-than-even chance of a downgrade in part due to a political impasse that is stalling plans to clean up its finances.

Asia's two biggest economies are in the ratings firing line alongside Europe and the United States as they deal with massive debts built up during the global financial crisis.

This is inevitable; it's just a matter of when - and whether it will be preceded by or follow the bursting of the Chinese real estate bubble and the Chinese POTEMKIN economy.

In every single gloabl case, the unsustainable sovereign debt burden is the result of socialist spending.

Runaway socialism - and not unbridled free-markets and deregulation - is the cause of the current global economic crisis. 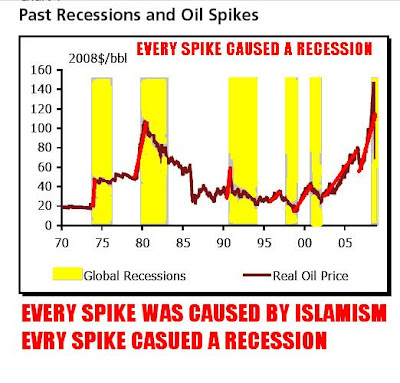 EVERY RECESSION SINCE WW2 HAS BEEN CAUSED BY A SPIKE IN ENERGY PRICES AND EVERY ONE OF THESE SPIKES WAS CAUSED MY ISLAMO-THUGGERY AND JIHADO-ADVENTURISM.

Posted by Reliapundit at 3:15 PM

The Senate has raised the debt ceiling.

Obama has proposed another stimulus bill -- with no visible way to pay for it.

Another downgrade of the U.S. credit rating cannot be far behind, IMO.