BIGTIME LIBERAL ADMITS THAT SOCIAL SECURITY IS A PYRAMID SCHEME

"Social Security also works because it has been a rolling compact across generations. For decades, the basis of the program was entirely pay-as-you-go -- the taxes paid by workers went to pay for current retirees. When those workers retired, they depended on the next generation to support Social Security. Then, in 1983, Congress raised payroll taxes above the level needed for immediate beneﬁts in order to accumulate savings for the baby-boom generation’s retirement."

For decades, the basis of the program was entirely pay-as-you-go -- the taxes paid by workers went to pay for current retirees. When those workers retired, they depended on the next generation to support Social Security

WHO IS PAUL STAR? HERE:

Paul Starr (May 12, 1949) is a Pulitzer Prize-winning professor of sociology and public affairs at Princeton University. He is also the co-editor (with Robert Kuttner) and co-founder (with Robert Kuttner and Robert Reich) of The American Prospect, a notable liberal magazine which was created in 1990. In 1994 he founded the Electronic Policy Network, or Moving Ideas, which is an online public policy resource. 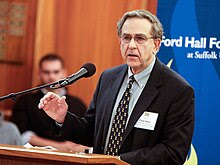 At Princeton University, Starr holds the Stuart Chair in Communications and Public Affairs at the Woodrow Wilson School. The Social Transformation of American Medicine won the 1984 Pulitzer Prize for General Non-Fiction[1] as well as the Bancroft Prize. His recent book The Creation of the Media received the 2005 Goldsmith Book Prize.

In 1993, Starr was the senior advisor for President Bill Clinton's proposed health care reform plan. He is also the president of the Sandra Starr Foundation.

Starr holds a B.A. from Columbia University and a Ph.D. from Harvard University. He lives in Princeton, New Jersey and is married to Ann Baynes Coiro. He has four children and three stepchildren.

SO... THIS EXCERPT IS FROM A LIBERAL OF IMPECCABLE CREDENTIALS DEFENDING SOCIAL SECURITY, BUT ESSENTIALLY ADMITTING IT WAS DESIGNED AS A PYRAMID SCHEME - ONE WHICH WOULD HAVE FAILED IN 1983 IF CONGRESS HADN'T INCREASED THE AMOUNT PEOPLE PAY IN.

AND WHAT'S THE DIFFERENCE BETWEEN A PYRAMID SCHEME AND A PONZI SCHEME?

NOT ENOUGH TO MAKE A REAL DIFFERENCE.

BASED ON DEMOGRAPHICS AN DECLINING GDP. THE CURRENT SYSTEM WILL NEED TO BE "SAVED" AGAIN.

THE SOONER WE DO IT THE LESS PAINFUL IT WILL BE.

WE SHOULD REFORM THE NATIONAL PENSION SYSTEM SO THAT YOUNGER WORKERS CAN PERSONALIZE THEIR ACCOUNTS AND MAKE THEM INHERITABLE WITHOUT DIMINISHING THE INCOME FOR THOSE WHO CURRENTLY DEPEND ON IT - OR SOON WILL.

MOST AMERICANS REALIZE THIS, AND ACCEPT THAT RETIREMENT AGE SHOULD BE RAISED AND COLA REDUCED.

BUT POLITICIANS REFUSE TO DO ANYTHING BECAUSE THE FEDERAL GOVERNMENT IS ADDICTED TO THE TRUST FUNDS INCOME.

WITHOUT IT, THE FEDERAL BUREAUCRACY WOULD BE FORCED TO SHRINK ENORMOUSLY.

AND POLITICIANS WOULD HAVE LESS OPPORTUNITY FOR GRAFT AND FOR REWARDING THEIR CRONIES.

Posted by Reliapundit at 4:47 PM