OBAMA FINALLY CONDEMNS THE JIHADIST ATTACKS AGAINST CHRISTIANS IN NIGERIA AND IRAQ... ER UM... SORT OF

The President would not blame “Islamic” radicals in his statement and said Muslims were also victims. 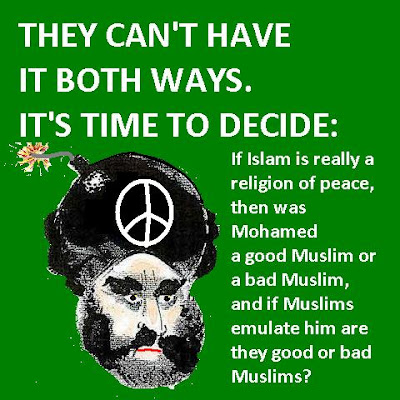 
THIS IS EITHER OUTRAGEOUS DENIAL OR INCREDIBLE STUPIDITY. OR BOTH.

Those who perp’ed these terrorist acts were emulating Mohamed.

If you don't accept that these acts were jihadist, then you just aren't being rational or reality-based.

AND: If - AS OBAMA OPINED- the terrorists were evil and barbaric then so was Mohamed.

And if Mohamed was barbaric, then Islam IS BARBARIC, and not a "religion of peace".

It’s long passed time Obama and the left accepted this and acted accordingly - or got out of our way.

OBAMA CONDEMNS THE ATTACK - BUT ASSERTS, INCORRECTLY, THAT BOTH MUSLIMS AND CHRISTIANS WERE KILLED.

It seems Obama can only bring himself to personally condemn attacks if they killMuslims. Either he is a crypto-msulim or a mus-symp. Same difference.

Posted by Reliapundit at 3:49 PM

Hmmmm......“I was for the possibility of bridging the gap between the east and the west but recently I have changed my mind on this issue, especially since the west wants to impose its values and traditions on us,”Sheikh Qaradawi.To me it reads like a declaration of war and since then Christians have been much more under attack!.

Hi.
One more thing.
Could it be that Obama only released his statement after this"Al-Azhar, one of Egypt's oldest centers of Islamic study and worship, issued a statement condemning the attack.
"This is a criminal act that can never be justified (in) any religion. Islam specifically prohibits any attacks on religious places. As a matter of fact, it tasks Muslims with protecting religious places of worship for Muslims and non-Muslims," Al-Azhar spokesman Mohammed Tahtawi told Nile TV."
This would be a sign to Muslims to speak up against the bombing!
Timing is everything!
Will.

I agree with everything you said, but I have a question:

How do we know there were no Muslims killed in the attack.

I mean, it seems to me he has asserted something here that he knows no one, including himself, can either prove of refute.

Pres. Lincoln stated: "I believe the Bible is the best gift God has ever given to man." But several Bible verses are embarrassing to Pres. Obama:
Proverbs 19:10 (NIV): "It is not fitting for a fool to live in luxury - how much worse for a slave to rule over princes!"
Also Proverbs 30:22 (NIV) which says that the earth cannot bear up under "a servant who becomes king."
And Ecclesiastes 5:2-3 (KJV) advises: "let thy words be few...a fool's voice is known by multitude of words."
Although Obama is not descended from slaves, he may feel that he's destined to become a black-slavery avenger.
Or maybe an enslaver of all free citizens!
For some stunning info on Pres. Obama and his fellow subversives, Google "Michelle Obama's Allah-day," "Obama Supports Public Depravity," "David Letterman's Hate Etc.," "Un-Americans Fight Franklin Graham" and also "Sandra Bernhard, Larry David, Kathy Griffin, Bill Maher, Sarah Silverman."
PS - Since Christians are commanded to ask God to send severe judgment on persons who commit and support the worst forms of evil (see I Cor. 5 and note "taken away"), Christians everywhere should constantly pray that the Lord will soon "take away" or at least overthrow all US leaders, including Obama, who continue to sear their conscience and arrogantly trample the God-given rights of the majority including the rights of the unborn. Do we need a second American Revolution?
PPS - For a rare look at a 180-year-old, imported-from-British-crazies endtime escapist belief which has long neutralized millions by promising them an "imminent rapture" off earth - which has diverted them away from being prepared to stand against all enemies, domestic as well as foreign - Google "Pretrib Rapture Dishonesty" and "Pretrib Rapture - Hidden Facts."