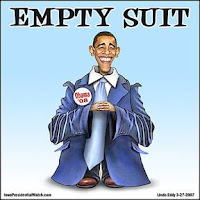 Does he have any? From Richard Cohen in the Washington Post finally asks questions conservatives have been asking for approximately two years now:

Who is this guy? What are his core beliefs? The president himself is no help on this score. When it comes to his own image, he has a tin ear....

Mr. Cohen gets specific in his essay:

For instance, it's not clear that Obama is appalled by China's appalling human rights record. He seems hardly stirred about continued repression in Russia. He treats the Israelis and their various enemies as pests of equal moral standing. The president seems to stand foursquare for nothing much.

Even some not on right are learning that BHO is an empty suit.

Voter remorse will likely continue to increase. May it increase so much that the November 2010 election shoves every Democrat out the doors of Capitol Hill.
Posted by Always On Watch at 7:04 AM