BLAGOJEVICH IS OBAMA'S LEWINSKY IN A BLUE DRESS Former Gov. Rod Blagojevich’s lawyers asked a federal judge today to force President Obama to testify at Blagojevich’s upcoming corruption trial, asserting that Obama played more of a role in the process of selecting someone to replace him in the U.S. Senate than Obama has acknowledged.

On the day before he was elected president, then-Sen. Obama personally called a union official about his desire for Blagojevich to appoint Obama adviser Valerie Jarrett to replace him in the Senate, according to Blagojevich’s defense filing in U.S. District Court in Chicago…

The statements by the union official to the FBI — as relayed through Blagojevich’s lawyers — had never been made public before now. 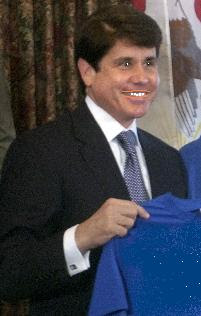 NOT ONLY WILL THIS EXPOSE OBAMA (AND RAHM) TO POTENTIAL PERJURY CHARGES - (WHICH IS AN IMPEACHABLE OFFENSE!) -

THE TRIAL WILL UNFOLD THIS SUMMER, AS THE MID-TERM CAMPAIGN BEGINS IN EARNEST.

IT'S CERTAINLY BIGGER THAN FOLEYGATE OR MACACCAGATE,

AND SO HAS POTENTIAL TO BLOCK OUT ANY GOOD NEWS ABOUT THE ECONOMY - OR ANYTHING ELSE.

OF COURSE: WE CAN'T COUNT ON THE MSM TO DO ANY OF THE HEAVY-LIFTING. 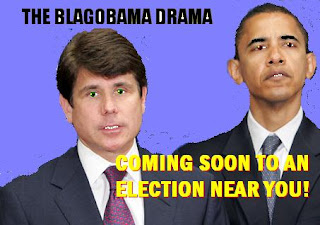 AND VIA MEMEORANDUM - IT GETS WORSE! (THANK GOD!):

Former governor Rod Blagojevich's defense team asked Thursday to issue a trial subpoena to the President of the United States of America.

The motion, intended to be heavily redacted, was improperly edited -- the full document was easily viewable if the text is copied and pasted to another document (an error first revealed on Capitol Fax).

Below, the six revelations the redacted portions were meant to conceal.

1. Obama may have lied about conversations with convicted fraudster Tony Rezko...

2. Obama may have overtly recommended Valerie Jarret for his Senate seat...

3. A supporter of President Obama may have offered quid pro quo on a Jarrett senate appointment..

6. Obama had a secret phone call with Blagojevich...

YUP: UNLIKE CLINTON, OBAMA MAY VERY WELL BE CONVICTED!
Posted by Reliapundit at 8:18 PM

One can hope! I knew there must be something to incriminate Obama in those tapes. Blago was acting way too confident while running around demanding that they be played in full. Will it be the act or the cover up that is Obama's downfall? Or will he get away with it because he is The One?

I'm hopeful, but they didn't prosecute the Black Panthers in PA, why now...

he may bring obama down: his defense may depond on it - and it might be true!