OBAMACARE: "the bastard son of a hundred maniacs" 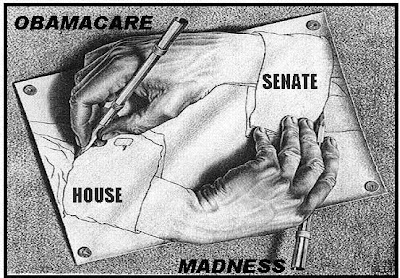 OBAMACARE: "the bastard son of a hundred maniacs" - and it's a work in progress because the other 200 "progressive" maniacs in Congress want a piece of the action, too!

We posted on why it was doomed early last year: it's WAY too big, and - as a result- the public recognizes it as a revolution and not reform. No amount of tweaking and rewriting at this point can change that.

EVEN BETTER: Politically, it's a lose-lose for the left. And the longer they work on it the worse they appear.

interesting concept with the picture. tail wagging the dog and what not.

Maybe a Pop-Up window for a comment box. I want to see your site again, but i cant till I am done writing here.

Love the Escher graphic. . .PERFECT illustration of current govt. Perhaps it can be enhanced with Obama as the eraser on the top of the writing instrument - erasing the constitution.