Obama didn't say that, but he might as well have.

Instead he said the fictional healthcare insurance crisis is hurting job growth and economic growth. 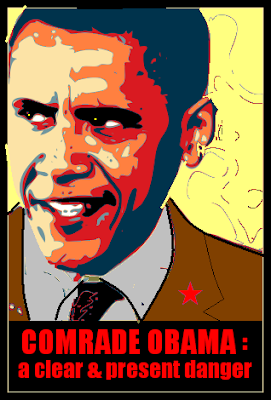 HE MUST THINK WE'RE ALL AS STUPID HIS HIS LEFTIST BASE.

If Obama REALLY wanted to increase economic growth all he has to do is RESCIND THE STIMULUS and cut all taxes by 25% for the balance of his term.

The economy will grow.

If he wants everyone to buy health insurance all he has to do is mandate interstate competition; give families the same tax break that businesses get for buying healthcare insurance; and cap malpractice torts.

Obama's economic schemes, his fiscal & tax policies, and CO2 regulations will do more to hurt the US economy and cause job losses than anything in our history.

By ignoring the impracticalities of his own policies and the efficacy's of the Right's polices, Obama is proving to be either the least curious and most ideological person to ever be POTUS, or he's dumb as shit, or he WANTS to ruin the USA and thereby the West.

IN ANY CASE: OBAMA AND HIS COMRADES MUST BE STOPPED.
Posted by Reliapundit at 12:30 PM