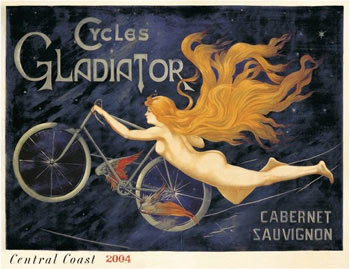 "Alabama doesn't want any images of naked flying nymphs hanging off bicycles on the labels of wine bottles sold in the state and that's just the way it is. Might give people the wrong idea. Who knows what folks might start trying on bicycles?

So the state's liquor control board has banned a California wine called Cycles Gladiator because its label uses an Art Nouveau image that once graced the posters of a turn-of-the-century French bicycle manufacturer. So "Fat Bastard" wine is OK but if you think you're going to sell a wine with an artful nude on the label in Alabama, you're just whistling Dixie.

As for Hahn Family Wines in Soledad, Calif., the state's move has been a marketing godsend.

So have a laugh at those Alabama hicks. The sophisticates of NYC would never sink that low, would they? See below.

They are about as tolerant as Joe Stalin, who said that "There is complete freedom of speech in Russia as long as you agree with me".

"Like many outlets of the CVS Caremark pharmacy chain, the store in Chelsea at Eighth Avenue and 24th Street has a book rack stocked with texts distributed by a Virginia-based company called Choice Books. These books are the inspirational type, many of them Christian-themed.

Leafing recently through titles like “Emergency Prayers” and “500 Questions & Answers from the Bible,” two Chelsea women were appalled by passages that called homosexuality a “cancer,” sinful and “detestable” to God. The women alerted Chelsea Now, a local newspaper, describing the passages as “hate speech” from which children had to be shielded.

Chelsea Now agreed in an editorial. In short order, CVS removed the two books from its stores throughout the city. “We are committed to building an environment of inclusion and acceptance that values diversity across all areas of our business,” a company spokesman, Michael DeAngelis, said in an e-mail message to me...

Christianity falls outside "diversity", apparently. We can't be TOO diverse, now, can we? The Left walk in lockstep like the Prussian soldiers of old. They would not know the meaning of diversity or tolerance. They use their brains only to defend their orthodoxies.

Posted by John Ray. For a daily critique of Leftist activities, see DISSECTING LEFTISM. To keep up with attacks on free speech see TONGUE-TIED. Also, don't forget your daily roundup of pro-environment but anti-Greenie news and commentary at GREENIE WATCH . Email me (John Ray) here
Posted by JR at 9:00 AM