TODAY'S MUST READ: MURPHY ON THE REAL OBAMA 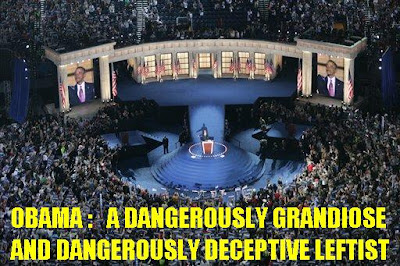 We've seen him [OBAMA] in action for a bit more than six months.

What we can say with confidence, now that we have the evidence of his actions, is that had he run on

(a) transforming the U.S. economy by massive federal government intervention,

(b) taking an owner's stake in the automobile industry,

Barack Obama wouldn't merely have lost the election, he wouldn't have got as many votes as gnarly old Ross Perot did in an election long past.

He wouldn't, in other words, have beaten a bad-tempered, egotistical spoiler.

... Mr. Obama has taken the real crisis of the U.S. (and world) economy and used it as the screen and lever for a massive agenda of transformation, a transformation that calls for expenditures on a scale never before seen in the history of government on this planet.

... These initiatives, however, were almost instantly overlaid with the Obama agenda of massive government expansion, or attempted expansion, into everything from the auto industry to health care - all of them sold with cries of urgency and executed with reckless haste.

Massive bills were passed before there were even copies of them to read.

The U.S. government's debt is being swollen beyond all previous records.

It is inconceivable that these ideas occurred to Mr. Obama postelection.

His agenda is of such scale and particularity that it is evidence of design and previous contemplation.

He knew what he wished to do when he was campaigning, but he was not going to whisper the scale and range of his designs while the campaign was on. It would have scared off people.

OBAMA IS THE MOST DECEPTIVE AND THE MOST EXTREME LEFT-WINGER EVER TO SET FOOT IN THE WHITE HOUSE.

WORSE THAN EVEN ALGER HISS.

OBAMA IS A CLEAR AND PRESENT DANGER TO THE USA, AND HIS PRESIDENCY DIRECTLY THREATENS THE STABILITY OF THE ENTIRE FREE WORLD.
Posted by Reliapundit at 5:04 PM