7/11/1864: ON THIS DATE IN US CIVIL WAR HISTORY: AN IMPORTANT CONFEDERATE DEFEAT

ON THIS DATE IN THE US CIVIL WAR: THE BATTLE FOR FORT STEVENS:

Campaign: Early’s Raid and Operations against the B&O Railroad (1864)

Description: On July 11, Lt. Gen. Jubal A. Early’s exhausted Confederates reached the outskirts of Washington near Silver Spring. Skirmishers advanced to feel the fortifications which at the time were manned only by Home Guards, clerks, and convalescent troops. During the night, veteran units from the Union VI Corps disembarked from troop transports and marched north through the streets of Washington to bolster the defenses. On July 12, Early was finally in position to make a strong demonstration, which was repulsed by the veteran Union troops. In the afternoon, VI Corps units sortied against the Confederate skirmishers, driving them back from their advanced positions in front of Forts Stevens and DeRussy.

President Lincoln watched the action from Fort Stevens and came under fire from Confederate sharpshooters.

Recognizing that the Union Capitol was now defended by veterans, Early abandoned any thought of taking the city. Early withdrew during the night, marching toward White’s Ford on the Potomac, ending his invasion of Maryland.

“We didn’t take Washington,” Early told his staff officers, “but we scared Abe Lincoln like Hell.”

LIKE HELL THEY DID. EARLY IS THE ONE WHO SNEAKED OUT AT NIGHT! 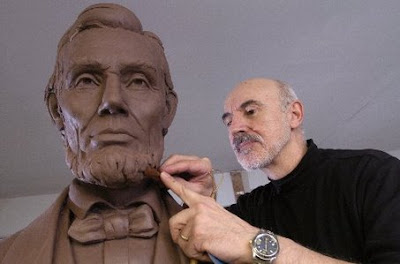 What we do here today, in dedicating Tony Frudakis’s statue of Abraham Lincoln, flies so finely in the face of this age of post-heroism that somewhere, we can be sure some voice will fix on this event to tell us that this is all farce—that Lincoln cannot be a hero because he was a racist, or that he cannot be the savior of the Union because the Union was rotten to its exploitative, capitalist, war-mongering, imperialist, Christ-loving, minority-massacring, little-Eichmann core and couldn’t deserve a savior. For six decades after his death, this was not so. Lincoln was the quintessential, the indispensable, American hero.

Of the 600 or so statues dedicated to American presidents, fully one third are of Abraham Lincoln; one of them, Daniel Chester French’s seated Lincoln in the Lincoln Memorial, may be the most famous American statue ever created.

But the post-World War One cultural malaise, which inaugurated an era of literary debunking and political minimalism, curved the arc of other Lincoln statuary downwards, away from the wise, heroic statesman and in the direction of a more folksy, proletarian Lincoln.

Even in Lincoln’s Illinois, statuary of Lincoln continues to bring him off pedestals, closer to the earth, sitting on park benches, in the fashion of Jeff Garland’s 2001 Just Don’t Sit There, Do Something, a park-bench Lincoln whose head was decapitated in 2007 as a wedding prank…Rick Harney’s 2006 Lincoln at Leisure, which captures a shirt-sleeved Lincoln leaning on a fence…and, in Springfield, John W. McClarey’s A Greater Task, which is supposed to depict Lincoln grasping his coat around him as he delivers his farewell speech in 1861, but which ends up making him look like a derelict panhandling for spare quarters. The statues, however, only reflect a larger decline in our estimate of Lincoln.

In a multicultural perspective, no triumphal, Union-saving Lincoln is allowed to emerge; multiculturalism is the celebration of ordinariness, information, and egalitarianism.

BOTTOM-LINE: TODAY'S MULTICULTURALISTS WOULD HAVE ACCEPTED SLAVERY AS PART OF SOUTHERN CULTURE - AND EVEN SUPPORTED THE SOUTH, (UNLESS THE SOUTH WOULD HAVE OPPOSED GAY MARRIAGE AND CARBON TAXES)!
Posted by Reliapundit at 2:46 PM