OBAMA REACHES OUT TO MUSLIMS: BACKS HOUSE OF SAUD OVER 9/11 FAMILIES! 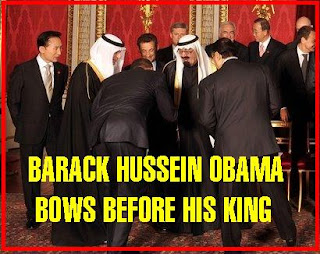 UNBEFRICKINLIEVABLE: The Obama administration is supporting efforts by the Saudi royal family to defeat a long-running lawsuit seeking to hold it liable for the Sept. 11, 2001, attacks.

The Justice Department, in a brief filed Friday before the Supreme Court, said it did not believe the Saudis could be sued in American court over accusations brought by families of the Sept. 11 victims that the royal family had helped finance Al Qaeda. The department said it saw no need for the court to review lower court rulings that found in the Saudis’ favor in throwing out the lawsuit.

The government’s position comes less than a week before President Obama is scheduled to meet in Saudi Arabia with King Abdullah as part of a trip to the Middle East and Europe intended to reach out to the Muslim world.

MORE HERE AT JAWA AND HERE AT WZ.

*******UPDATE: THIS IS WHAT OBAMA'S BEST BUDDIES IN SAUDI ARABIA ARE REALLY LIKE:

Saudi authorities beheaded and crucified a man convicted of brutally slaying an 11-year-old boy and his father, the Interior Ministry announced.

... Crucifying the headless body in a public place is a way to set an example, according to the kingdom's strict interpretation of Islam. Normally those convicted of rape, murder and drug trafficking in Saudi Arabia are just beheaded.

OBAMA'S OBEISANCE TO THE HOUSE OF SAUD AT THE EXPENSE OF THE VICTIMS OF 9/11 IS YET ANOTHER STOP ON OBAMA'S "APPEASE THE ENEMY EXPRESS". ATLAS:

His personal commitment? Perhaps Obama will come clean. One thing is fosho, Obama exonerated me from every vile leftwing accusation during the run up to the election. He proved everything I said to be true.

Will Obama be the first Muslim leader in history to be kind to the Jews and infidels? Color me skeptical.

President Barack Obama will offer a "personal commitment" to bridge US differences with Muslims in his long-awaited speech to the Islamic world next week in Egypt, aides said.

But White House advisors said Friday that Obama would not shy away from addressing "tough issues" in the speech on Thursday at the University of Cairo which will be co-hosted by Al-Azhar University, an ancient center of Islam and learning.

"The speech will outline his personal commitment to engagement, based upon mutual interests and mutual respect," White House spokesman Robert Gibbs said.

IF OBAMA REALLY WAS A CRYPTO-MUSLIM AND A SOCIALIST - EVEN A BAATHIST - HE WOULD NOT BE DOING ANYTHING DIFFERENTLY.

Imagine if he had loaded the Bin Laden family in private jets and flown them home through an airspace lockdown just after 9/11!

... AS IF BUSH CONSPIRED TO GET THE SAUDIS OUT OF THE USA.

YOU ONLY REVEALING YOURSELF TO BE A DUPE...