HYPOCRISY, THY NAME IS OBAMA, (and thy nominee - Sotomayor) 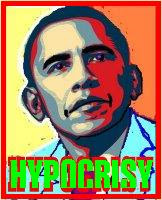 On January 29, 2006, Mr. Obama told George Stephanopulos on "This Week" that he would "be supporting the filibuster because I think Judge Alito, in fact, is somebody who is contrary to core American values, not just liberal values, you know. When you look at his decisions in particular during times of war, we need a court that is independent and is going to provide some check on the executive branch, and he has not shown himself willing to do that repeatedly."

... It does not appear that a filibuster will be attempted against Sotomayor.

The ranking Republican on the Senate Judiciary Committee, Sen. Jeff Sessions, R-Ala., was among 28 Republicans who voted against Sotomayor's ascension to the Court of Appeals in 1998.

But he told CNN this week, "I don't sense a filibuster in the works."

"The nominee has serious problems," Sessions said. "But I would think that we would all have a good hearing, take our time, and do it right. And then the senators cast their vote up or down based on whether or not they think this is the kind of judge that should be on the court."

OBAMA AND THE DEMOCRATS ARE UNPRINCIPLED OR HYPOCRITES.

SESSIONS AND THE GOP ARE PRINCIPLED.

SOTOMAYOR IS A DEMOCRAT - AND EITHER A RACIST (FOR WHAT SHE'S SAID MANY TIMES ABOUT BEING A LATINA AND HOW LATINAS ARE SUPERIOR TO WHITE MEN), OR SHE'S A HYPOCRITE: FOR VOTING WITH WHITE MALE JUDGES AND AGAINST DISCRIMINATION CLAIMS BY PLAINTIFFS BY A RATIO OF 8-TO-1).

THAT'S ALL YOU NEED TO KNOW.

SENATORS: WE DEMAND YOU DISSENT ACCORDINGLY.

FULL ROUND UP HERE.
Posted by Reliapundit at 4:22 PM