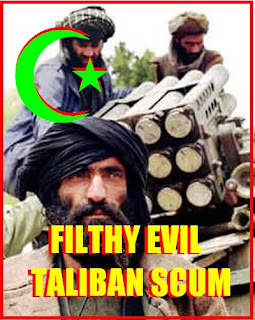 Pakistani Taliban will not lay down their arms in a northwestern valley as part of a deal that included the introduction of sharia law but will take their "struggle" to new areas, a militant spokesman said on Wednesday.

The strategy of appeasement has alarmed U.S. officials, while critics say the government has demonstrated a lack of capacity and will to fight the Taliban and al Qaeda.

Details of the deal have not been made public but government officials backing the pact have said part of it was that militants would give up their arms.

But a Pakistani Taliban spokesman in the scenic valley, a one-time tourist destination 125 km (80 miles) northwest of Islamabad, said they would be keeping their guns.

THERE IS NO REAL SHOCK HERE: PEOPLE WHO BEHEAD HOSTAGES AND COMMIT "HONOR"-KILLINGS CANNOT BE EXPECTED TO KEEP THEIR PROMISES.

THEY SHOULD BE ANNIHILATED.
Posted by Reliapundit at 10:02 PM

Were these the moderates that Obama wanted to open a dialogue with?

It's not too late you know. Obama should personally go over there and talk to these misunderstood moderate Taliban. Yeah that's it. Let Obama go there and shake their hands and tell them about change.