MORE MAJOR GAFFES FROM OUR INCOMPETENT COMMANDER IN CHIEF 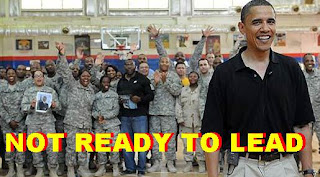 Mr Obama, referring to the US policy in Iraq, said: "If you talk to General [David] Petraeus, I think he would argue that part of the success in Iraq involved reaching out to people that we would consider to be Islamic fundamentalists, but who were willing to work with us because they had been completely alienated by the tactics of al-Qaeda in Iraq."

OBAMA ALSO SAID "WE'RE NOT WINNING." NOT A GREAT WAY TO PUT IT. THE US COMMANDER ON THE GROUND HAS CALLED IT " A STALEMATE" - AND THAT'S WHY OBAMA SENT MORE TROOPS. OBAMA SHOULD EMPHASIZE TO POSITIVE AND OUR RESOLUTENESS , OUR RESOLVE TO STICK IT OUT UNTIL WE WIN.

ANYTHING LESS AIDS THE ENEMY.

He also discussed what the US would do if a terror suspect appeared in a country without an extradition arrangement with the US.

"There could be situations - and I emphasise 'could be' because we haven't made a determination yet - where, let's say that we have a well-known al-Qaeda operative that doesn't surface very often, appears in a third country with whom we don't have an extradition relationship or would not be willing to prosecute, but we think is a very dangerous person," he said.

"I think we still have to think about how do we deal with that kind of scenario," he added. 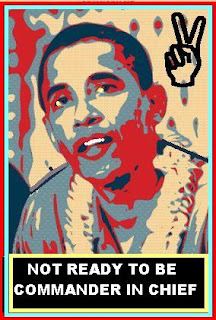 IS OBAMA SO STUPID HE DOESN'T KNOW HOW TO TALK LIKE A COMMANDER IN CHIEF?

OR IS HE DELIBERATELY SABOTAGING OUR EFFORTS!?

What may be the most interesting thing about this gaffe, is that Obama concedes that GEN Petraeus has more credibility than he does. Obama doesn't have the confidence to state his own opinion, he has to put it in GEN Petraeus's mouth, in the hopes that if the General said it, you might believe it. Obama has a credibility gap. His presidency is over.