AS PREDICTED: OBAMA APPEASES ISLAMISTS AND TURNS UP THE HEAT ON ISRAEL 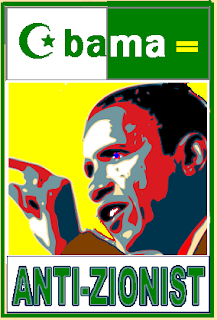 ON THE HEALS OF HIS ANNOUNCING HE'D BE OPEN TO DIALOG WITH THE TALIBAN, AND WAS HAPPY WITH THE DEAL THE PAKISTANIS MADE IN SWAT, THIS:

HAARETZ: U.S. turns up heat on Israel over settlements

Israel is under increased pressure from the United States over settlement construction. In the past month, since Barack Obama was sworn in as U.S. president, Israel has received four official complaints from members of the new administration regarding various issues linked to West Bank settlements.

A senior government official in Jerusalem told Haaretz that the complaints represent a gradual increase in American pressure vis-a-vis settlement activity. "This is going to be one of the main issues that the Obama administration will be dealing with in the coming weeks and months," the official said. "It is not going to be easy to argue with them."

The American complaints were relayed to Jerusalem via senior officials in the State Department as well as the National Security Council, which seek clarifications and explanations from Israel.

The four separate complaints relate to the demolition of Palestinian-owned homes in East Jerusalem, reports of Israeli plans to construct additional housing in the E1 area, between Maaleh Adumim and Jerusalem, the relocation of the illegal outpost at Migron to a new, as-yet unbuilt neighborhood of the Adam settlement and to plans to build thousands of new residential units in the settlement of Efrat.

"Thus far," the Israeli official said, "the issue has been raised by senior officials, but it is going to go higher up the hierarchy. It is a safe bet that special envoy George Mitchell will raise the matter when he makes his next visit to the Middle East in a few weeks, after the Netanyahu government is sworn in."

OBAMA IS TURNING UP THE HEAT ON ISRAEL. OUR BEST ALLY - ON THE FRONT-LINES IN THE GWOT.

OBAMA ISN'T FOR PEACE: HE'S ON THE OTHER SIDE.