SARAH PALIN: SHOCK AND AWE AT THE VP DEBATE!


EVEN THE SWING VOTERS SWUNG TOWARDS SARAH!

One of the very best debate performances I've ever seen by anyone. Only the liberal media could deny her this victory. This was a clear victory. I would consider this a knock-out!!--Rudy Giuliani

Unbelievable win for Sarah Palin! In fact, I think that it unveiled a level of skill in communication that I really have not seen since Ronald Reagan. She is a super star!--Dick Morris

Kathleen Parker, George Will and David Brooks all owe Sarah Palin a huge apology!! They were all willing to throw her under the bus after one bad interview.

Even Charles Krauthammer who has been a Palin skeptic said she did "extremely well". Michelle Malkin sums up my sentiments in this response:

First, I would like to see all the Sarah doubters and detractors in the Beltway/Manhattan corridor eat their words.

Sarah Palin is the real deal. Five weeks on the campaign trail, thrust onto the national stage, she rocked tonight’s debate.

She was warm, fresh, funny, confident, energetic, personable, relentless, and on message. She roasted Obama’s flip-flops on the surge and tea-with-dictators declarations, dinged Biden’s bash-Bush rhetoric, challenged the blame-America defeatism of the Left, and exuded the sunny optimism that energized the base in the first place.

McCain has not done many things right. But Sarah Palin proved tonight that the VP risk he took was worth it. 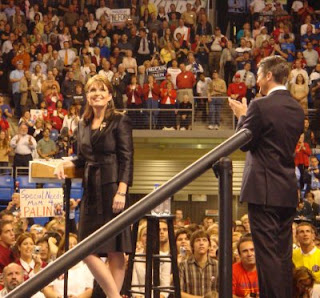 Jim at Gateway Pundit blogged on the debate and the rally after wards. The rally had 10,000 people who were fired up and "greeted Sarah Palin like a Super Bowl Champion".
Posted by Dionne at 4:02 AM

the VP debate was stunning. Palin did a decent job faking about 20% of the questions and didn't even bother answering the other 80%...

i couldn't help thinking of the end of the movie Billy Madison, when the Principal says to Adam Sandler, "Mr. Madison, what you've just said is one of the most insanely idiotic things I have ever heard. At no point in your rambling, incoherent response were you even close to anything that could be considered a rational thought. Everyone in this room is now dumber for having listened to it. I award you no points, and may God have mercy on your soul."