Here's the latest nutty Obama interview of the day...

Even his facial expressions are telling in this interview-- He doesn't have the slightest clue on what he's talking about... It is amazing.
Here are a couple of notable lines:

--Private security contractors put our troops in harm's way(?)
--If you start building a military premised on the use of private contractors and you start making decisions on armed engagement based on the availability of private contractors to fill holes and gaps that over time you are, I believe, eroding the core of our military’s relationship to the nation(?)
--I think you are privatizing something that is what essentially sets a nation-state apart, which is a monopoly on violence(?)

Does Barck even understand what Blackwater does ... they are NOT mercenaries. They do not replace the activity of our armed forces but actually complement the effort through special tasks best left to security professionals.

I HAD A HUGE ARGUMENT WITH A COUPLA THREE HARDCORE/BRAINWASHED LEFTIES ON THIS EXACT SUBJECT OVER THE WEEKEND.
THE LEFTIES I WAS ARGUING WITH SHUT UP WHEN I SHOWED THEM THESE TWO THINGS:

A mercenary is a person who takes part in an armed conflict who is not a national or a party to the conflict and "is motivated to take part in the hostilities essentially by the desire for private gain and, in fact, is promised, by or on behalf of a Party to the conflict, material compensation substantially in excess of that promised or paid to combatants of similar ranks and functions in the armed forces of that Party"

THIS IS NOT WHAT OUR UNIFORMNED ARMED FORCES DO IN IRAQ OR ANYWHERE ELSE.

THEN THERE'S THIS QUOTE FROM THE AMBASSADOR TO IRAQ - ABOUT BLACKWATER:

In his comments on Friday, Crocker defended the work of private security contractors like Blackwater as “absolutely essential” to the functioning of embassy staff.

The State Department last week renewed Blackwater’s contract despite the fact that an FBI investigation into the September incident is still under way.

Crocker said he and his team would not able to do their jobs if they did not have such protection.

“The challenges of getting the nation’s business done in Iraq are pretty substantial,” he said. “We have to function in conditions that would in most places have us pretty much in a stand-down. But this is the nation’s most critical work, and it has to go on, and security contractors like Blackwater are absolutely essential to this effort.”

TIME MAGAZINE HAS THIS ON BLACKWATER'S ESSENTIAL MISSION:

Founded by former Navy SEAL Erik Prince, the firm is privately held and secretive. Last week U.S. ambassador to Iraq Ryan Crocker testified to the Senate that the State Department is overwhelmingly dependent on contractors like Blackwater for its security. As he put it, "There is simply no way at all that the State Department's Bureau of Diplomatic Security could ever have enough full-time personnel to staff the security function in Iraq. There is no alternative except through contracts." 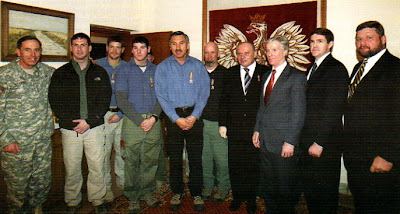 The government of Poland has bestowed its Silver Star and Bronze Star combat medals on foreigners for the first time since World War II - and Blackwater security men were the recipients.

Polish Ambassador to Iraq Edward Pietrzyk (fourth from right) presented the awards on behalf of his government in a January, 2008 ceremony to recognize the Blackwater guards for evacuating him by helicopter after an October 2007 assassination attempt. Poland is one of the most important NATO allies in Iraq.
The State Department's internal State Magazine has the story in its April, 2008 issue. The award ceremony was considered so important that US Ambassador Ryan Crocker (third from right) and General David Petraeus (left) attended and posed for pictures with the contractors. The above photo, picturing some of the Blackwater men, appears in the magazine.

Dictionary Definition of Mercenary is

"a professional soldier hired to serve in a foreign army."

Sounds like blackwater is a Mercenary Organization to me.

Look things up first, but i guess for people like you, ignorance is the way to go.

Wo are the Lefties that shut up, after you showed them quotes that literally proved their points? I want them kicked out of our dovish enclave immediately!