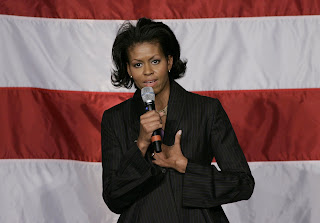 I have a new story today about Michelle Obama's visit to Zanesville, Ohio, where she met with a group of women at a local day care center. According to the U.S. Census, Muskingum County, where Zanesville is located, had a median household income of $37,192 in 2004, below both the Ohio and national averages. Just 12.2 percent of adults in the county have a bachelor's degree or higher, also well below the state and national averages. About 20 percent don't have a high school degree. Nevertheless, Mrs. Obama urged them to foreswear lucrative professions like corporate law or hedge fund management and go into the helping industry, even if the sacrifice is great:

As she has many times in the past, Mrs. Obama complains about the lasting
burden of student loans dating from her days at Princeton and Harvard Law
School. She talks about people who end up taking years and years, until middle
age, to pay off their debts. “The salaries don’t keep up with the cost of paying
off the debt, so you’re in your 40s, still paying off your debt at a time when
you have to save for your kids,” she says.

“Barack and I were in that position,” she continues. “The only reason we’re
not in that position is that Barack wrote two best-selling books… It was like
Jack and his magic beans. But up until a few years ago, we were struggling to
figure out how we would save for our kids.”

A former attorney with the white-shoe Chicago firm of Sidley & Austin,
Obama explains that she and her husband made the choice to give up lucrative
jobs in favor of community service. “We left corporate America, which is a lot
of what we’re asking young people to do,” she tells the women. “Don’t go into
corporate America. You know, become teachers. Work for the community. Be social
workers. Be a nurse. Those are the careers that we need, and we’re encouraging
our young people to do that. But if you make that choice, as we did, to move out
of the money-making industry into the helping industry, then your salaries
respond.”

Faced with that reality, she adds, “many of our bright stars are going into
corporate law or hedge-fund management.”What she doesn’t mention is that the
helping industry has treated her pretty well. In 2006, the Chicago Tribune
reported that Mrs. Obama’s compensation at the University of Chicago Hospital,
where she is a vice president for community affairs, jumped from $121,910 in
2004, just before her husband was elected to the Senate, to $316,962 in 2005,
just after he took office. And that does not count the money Mrs. Obama receives
from serving on corporate boards. She would have been O.K. even without Jack’s
magic beans.

Mrs. Obama also bemoaned the amount of money she has to spend — nearly one-third of the median household income in Zanesville — on piano, dance, and other lessons for her two children. But she was grateful for the concern her husband's supporters have shown for her. "Everywhere I go, no matter what, the women in the audience, their first question for me is, 'How on earth are you managing it, how are you keeping it all together?'" she told the women.

It is bad enough that she is telling people who are relatively poor to not pursue lucrative careers. Yes, that is bad enough. But, Michelle Obama's suggestion, if it were to be taken up by sizable numbers of people, would bankrupt the economy.
Those lucrative corporate careers are where the money is made that pays the taxes that provide for jobs as teachers and social workers.
Do you think, possibly, Michelle Obama is so ignorant of basic economics that she doesn't even know that?
Or, is she just talking down to a group of middle-class women and, thereby, destroying their "hope" and their dreams?
Hope is making a comeback, indeed.
Posted by Pastorius at 10:24 AM