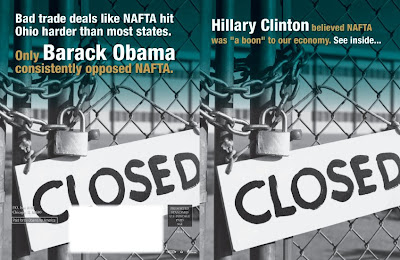 Talk about the politics of fear!

Unfortunately for Obama, the brochure's content appears to be as truthful as the politician's image as a bi-partisan healer. According to the Wall Street Journal, thanks to NAFTA, Ohio's biggest trading partners are now Mexico and Canada:

Ohio workers would pay a heavy price for pulling out of Nafta. Canada and Mexico are the top two markets for exports from Ohio, accounting for more than half of the state's exports in 2006. According to the Ohio Department of Development, 283,500 workers in the state earn their living in the export sector, with machinery, car parts, aircraft engines and optical/medical equipment among the leading exports.

Posted by directorblue at 11:55 AM